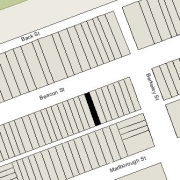 163 Beacon is located on the south side of Beacon, between Berkeley and Clarendon, with 161 Beacon to the east and 165 Beacon to the west.

Click here for an index to the deeds for 163 Beacon, and click here for further information about the land between the south side of Beacon and Alley 420, from Berkeley to Clarendon.

Henry Whitwell lived at 161 Beacon with his parents, Samuel Whitwell and Sophia (Story) Whitwell, and his unmarried sister and brother, Sophia Louisa Whitwell and Samuel Horatio Whitwell (who also was his business partner).

In August of 1871, Henry  Whitwell offered the new house at 163 Beacon for sale.  In an August 18, 1871, advertisement in the Boston Daily Advertiser, he described it as “finished throughout in the best manner, in hard wood, for sale on liberal terms.”  It remained unsold until 1872.

On March 5, 1872, 163 Beacon was purchased from Henry Whitwell by Daniel Denny, Jr. He and his wife, Mary DeForest (Bigelow) Denny, made it their home. They previously lived on Savin Hill Road in Dorchester. They also maintained a home in Milton.

The Dennys continued to live at 163 Beacon until about 1878, when they made their home in Milton their year-round residence.

On April 29, 1878, 163 Beacon was purchased from Daniel Denny by retired iron merchant Roger Newton Allen. He and his wife, Lydia Goodwin (Russell) Allen, made it their home. They previously had lived in Montreal. They also maintained a home in Plymouth.

During the 1892-1893 winter season, the Allens were living elsewhere and 163 Beacon was the home of Herbert Merriam and his wife, Fanny (Hawes) Merriam. Herbert Merriam owned and operated Cherry Brook Farm in Weston, which also was their primary residence. They had lived at 351 Marlborough during the 1891-1892 winter season. The Merriams had moved by late 1893, and 163 Beacon was once again the Allens’ home.

In May of 1899, they sold their home in Plymouth to Lydia Allen’s brother, Thomas Russell.  He and his wife, Laura (Parks) Russell, lived at 3 Gloucester.

William G. R. Allen graduated from Harvard in 1903 and moved to Richmond, Indiana, and then Cincinnati, working for the Chicago, Cincinnati and Louisville Railroad, and then moved to New York City where he was a stock and bond dealer. He returned to Boston in 1910 and entered the roofing slate quarrying business.  He lived briefly with his parents at 163 Beacon and then moved to Poultney, Vermont.  By September of 1918, when he registered for the draft, he had returned to Boston and was living in an apartment at Brandon Hall, 1501 Beacon in Brookline.

Rosamond Allen married in May of 1911 to Dr. David James Evans, He was a physician in Montreal, where they lived after their marriage.

Lydia Allen died in August of 1913 and Mrs. Lothrop moved soon thereafter to The Charlesgate at 4 Charlesgate East (535 Beacon). Roger Allen continued to live at 163 Beacon.

On January 19, 1917, Roger Allen transferred 163 Beacon to his daughter, Rosamond Evans. She and her husband continued to live in Montreal.

Roger Allen lived at 163 Beacon until shortly before his death in June of 1919.  At the time of his death, he was living with his son, William, at Brandon Hall in Brookline.

During the 1921-1922 winter season, it was the home of Mrs. Constance Baillie (Rose) Ripley, the former wife of stockbroker Louis Arthur Ripley, from whom she had been divorced in about 1916.  Their four children — Julie, Constance, Louis, and Sidney Dillon Ripley — lived with her.  They previously had lived at 193 Beacon . They also maintained a home in Litchfield, Connecticut.  S. Dillon Ripley later would become a noted ornithologist and would serve as Secretary of the Smithsonian Institution for twenty years.

By the 1922-1923 season, Mrs. Ripley and her children had moved to the Hotel Somerset, and by the next season were living in an apartment at 224 Marlborough.

By the 1922-1923 winter season, David and Rosamond (Allen) Evans had made 163 Beacon their home, he having retired from his medical practice in Montreal. They also maintained a home in Dover, Massachusetts.

David Evans died in September of 1928.

Rosamond Evans continued to live at 163 Beacon until about 1965.

On August 18, 1965, 163 Beacon was purchased from Phillips Ketchum, conservator of the property of Rosamond Allen Evans, by Rose Bornstein, trustee of the Rochelle Realty Trust.

Rose Rochelle (Goldberg) Levin Glazer Bornstein was the former wife of Reuben Levin and Max L. Glazer. She was a retired pianist and entertainer who performed as (and legally changed her name to) Rose Rochelle. She had married in the early 1960s to Morris Bornstein, after which she was known as Rose Bornstein. He died or they separated by 1965. She owned and lived in an apartment house at 273 Beacon, and also owned several other apartment buildings and lodging houses in the Back Bay and South End. In 1964, she had briefly owned 165 Beacon.

On December 22, 1965, 163 Beacon was acquired from Rose Bornstein by Burdett College.

On April 4, 1968, 163 Beacon was purchased from Burdett College by Michael Aifer, trustee of the A&A Realty Trust. In March of 1968, prior to finalizing his purchase of the property, he had applied for (and subsequently received) permission to change the occupancy from a single family dwelling and lodging house (with twenty lodgers) to twelve apartments.

On June 5, 1972, 163 Beacon was acquired from Michael Aifer by William F. Mullen. On December 6, 1979, he converted the property into twelve condominium units, the 163 Beacon Condominium.