454 Beacon is located on the north side of Beacon, between Hereford and Massachusetts Avenue, with 452 Beacon to the east and 456 Beacon to the west.

454 Beacon was designed by Fehmer and Page, architects, and built in 1890 by Lyman D. Willcutt, mason, as the home of retired cotton manufacturer Francis Blake Rice and his wife, Sarah (Sallie) Blake (Austin) Rice. He is shown as the owner on the original building permit application, dated June 19, 1890, and on the final building inspection report, dated October 23, 1891.

They purchased the land from Richard Cowell Dixey, a musician, and his wife, Ellen Sturgis (Tappan) Dixey, who had acquired it on March 15, 1887, from William Simes. When they purchased the lot, the Dixeys were living temporarily at 179 Commonwealth and may have been contemplating building their home at 454 Beacon. Instead, they moved to 44 Beacon. The lot at 454 Beacon originally was part of a parcel William Simes had purchased from the Boston and Roxbury Mill Corporation on March 15, 1886.

On May 20, 1892, Francis Rice transferred the property into his wife’s name.

The Rices continued to live at 454 Beacon during the 1904-1905 winter season, but moved thereafter to 63 Commonwealth.

On September 20, 1921, 454 Beacon was purchased from Fanny Young’s estate by William Emery Nickerson. He and his wife, Nellie R. (Partridge) Nickerson, made it their home. They previously had lived in Cambridge.

William Nickerson was an engineer and inventor.  He was one of the founders of the Gillette Safety Razor Company and was the principal inventor of the machinery used to produce its first razors.

In October of 1921, he applied for (and subsequently received) permission to build a garage and coal storage building at the rear of the property. 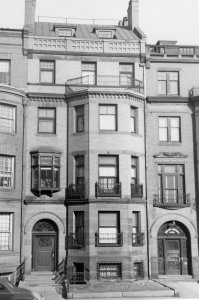 William Nickerson died in June of 1930. Nellie Nickerson continued to live at 454 Beacon. His estate continued to own 452 Beacon until December of 1934, when it was purchased by the Reconstruction Clinic and Hospital.

Nellie Nickerson died in May of 1937.

By 1938, 454 Beacon was the home of William Nickerson’s brother-in-law and sister, Harry Alba Smith and Alice Mary (Nickerson) Smith. They previously had lived in Somerville. He was a restaurant owner.

The property continued to be owned by William Nickerson’s estate until February 28, 1946, when it was purchased by Harry and Alice Smith.

On December 6, 1949, 454 Beacon was purchased from Harry Smith by 454 Beacon Street, Inc. In January of 1950, it applied for (and subsequently received) permission to convert the property from a single-family dwelling into nine apartments and a doctor’s office. In May of 1950, it amended the permit to increase the number of apartments from nine to ten (presumably eliminating the doctor’s office).