Each block of four houses was designed as a symmetrical group, centered on the paired entrances to the middle houses (34-36 Fairfield and 33-35 Fairfield). It appears likely that the eight houses originally matched in design, all with bays topped with conical roofs. 31-33-35-37 Fairfield remained unchanged as of 2015, but 32-34-36-38 Fairfield were significantly altered. Additional floors were added very early to 36 and 38 Fairfield, inasmuch as they appear as three story houses on the 1887 Sanborn map, whereas 32 and 34 Fairfield (and 31-33-35-37 Fairfield) are described as 2 story houses with French roofs. They are similarly described on the 1897 Sanborn map. Based on similar information on the Bromley maps, the additional story at 32 Fairfield was added between about 1908 and 1912. The additional story at 34 Fairfield was added sometime after the early 1940s, with a remnant of the original roof retained.

On May 31, 1876, Asa Potter purchased the land for 31-33-35-37 Fairfield from wholesale dry goods merchant George H. Braman. The purchase also included the land where 246 Commonwealth would be built. On the same day, Delle S. Potter purchased the land for 29 Fairfield from George Braman. On October 21, 1878, Asa Potter entered into an agreement with National Bank of Commerce of Boston to purchase the land for 32-34-36-38 Fairfield. He completed the purchase on June 21, 1879, after the houses had been built. All of the land was part of a parcel previously owned by Nathan Matthews, part of an even larger tract which was purchased by Nathan Matthews on January 2, 1871, from David Sears, Jr., Frederick R. Sears, and Knyvet Sears.

Click here for an index to the deeds for 32 Fairfield.

Having purchased the land (or secured the right to purchase it), Asa Potter worked with builder Silas Whiton Merrill and his son, Luther Moore Merrill, to construct the houses. Silas W. Merrill is shown as builder on the permit applications for 31-33-35-37 Fairfield, with mason John F. Richardson for 31-33 Fairfield and alone for 35-37 Fairfield.  As noted above, the permit applications for 32-34-36-38 Fairfield have not been located.  However, on October 27, 1878, the Boston Globe reported that Luther M. Merrill had been granted permits for two of the houses (32-34 Fairfield), and on June 5, 1879, it reported that Silas W. Merrill had been granted permits for the remaining two (36-38 Fairfield).

An April 12, 1879, Boston Journal on “Building Operations in the Back Bay” summarized the development of the eight houses as of the spring of 1879: “On Fairfield street, between Commonwealth avenue and Newbury street, Luther M. Merrill has erected a block of four small houses, 26 [sic] by 44 feet, two stories, Mansard roof.  These houses contain eleven rooms, and have been sold for $10,000 and $11,000 each.  On the opposite side of the street the same builder has erected for Asa P. Potter two houses of the same style and dimensions, and has a permit for two more.”

In all but two cases (31-33 Fairfield), after the houses were built, Asa Potter held the property until a buyer was found, and then sold the land with the house on it to Silas Merrill, who resold it on the same day or soon thereafter – presumably at a profit – to the buyer.

The pattern was different for 31-33 Fairfield, the first two houses sold (both in August of 1878). In the case of 31 Fairfield, Asa Potter sold the house to Jarvis Dwight Braman, president of the Boston Water Power Company, who resold it on the same day (Jarvis Braman was the brother of George H. Braman, from whom Asa Potter had acquired the land). In the case of 33 Fairfield, Asa Potter sold house to Silas Merrill, who then mortgaged it and transferred it back the next day to Asa Potter, who sold it soon thereafter. Silas Merrill had filed for bankruptcy in May of 1878, and the approach to these two sales may have reflected his financial position. The other six sales all were in 1879, presumably after his bankruptcy was resolved.

On July 28, 1879, Asa Potter sold 32 Fairield to Silas Merrill, and on August 4, 1879, he sold 34 Fairfield to him. In both deeds, he included an easement reserving a three foot wide strip across the eastern boundary to provide access to the alley for the houses to the south. A similar easement was included in the deed for 36 Fairfield.

Charles Edward Thayer died in December of 1898. In his will, he left bequests to all of his children, specifying that any child who, at the time of his death, was occupying a residence owned by him, could opt to remain there, taking ownership and deducting the value from his bequest. 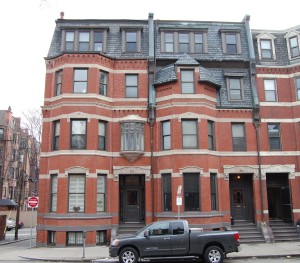 On December 22, 1899, Charles Irving Thayer acquired 32 Fairfield from his father’s estate and, on the same day, he transferred it to his wife.

Charles and Florence Thayer continued to live at 32 Fairfield in 1906 but were living elsewhere during the 1906-1907 winter season, when it was the home of attorney Richard S. Dow and his wife, Abbie (Rawson) Dow.  They also maintained a home in Marion.

By 1908, the Dows had moved to 18 Marlborough and the Thayers were once again living at 32 Fairfield.

In 1921, Charles and Florence Thayer were joined at 32 Fairfield by wholesale wool merchant Roger Sherman Dix and his wife, Louise (Parrish) Dix.  They had lived at 265 Clarendon in 1920.  They also maintained a home in Greenbush.  By 1922, they had moved to Scituate.

The Thayers continued to live at 32 Fairfield until about 1927, when they moved to The Sheraton at 91 Bay State Road.   They also maintained a home in Marion.

Paul M. Hamlen was a real estate dealer and purchased the property on Fairfield as an investment for the benefit of himself and his siblings. He and his wife, Agnes Dorothy (Devens) Hamlen, lived at 32 Gloucester and also maintained a home in Wayland.

Under the terms of William Powell Perkins’s will, the income from the trust was to be paid to the four living children of Miriam (Perkins) Loring – Francis Caleb Loring, Jr., Anna Loring, Miriam P. Loring, and Helen Loring – and to the four children of Gertrude (Loring) Hamlen, who predeceased William Powell Perkins. The trust was to remain in effect until the death of the last surviving child of Miriam (Perkins) Loring, and then to be terminated. The principal was then to be distributed to the children of Gertrude (Loring) Hamlen, her siblings having been childless.

On April 12, 1929, Paul Hamlen transferred 32-34-36-38 Fairfield to himself and his three sisters: Miriam Perkins (Hamlen) Warren, the wife of Edward R. Warren, Elizabeth Perkins Hamlen, and Gertrude Loring (Hamlen) Catlin, the wife of Daniel K. Catlin. On the same day, they transferred the property back to him as trustee under another trust that they had established in 1904 to manage income to them under the trust established by William Powell Perkins. On June 29, 1929, Paul Hamlen transferred the property to himself as trustee under the will of his grandfather, Nathaniel Hamlen, also established for the benefit of Paul Hamlen and his sisters, thereby consolidating their assets in one trust.

Paul Hamlen converted 32-34-36-38 Fairfield into lodging houses, which he rented to others to operate.

32 Fairfield continued to be a lodging house with various operators.

By 1936, it was the home of Charles Granville Ellis, a vacuum cleaner salesman, and his wife, Gladys Vera (McConnell) Houston Ellis, who operated it as a lodging house.  They had lived at 36 Fairfield in 1935, where they also had operated a lodging house (and probably continued to do so after they moved).  They continued to live at 32 Fairfield until about 1944, probably also continuing to operate the lodging houses at both 32 and 36 Fairfield (they are listed at both addresses in the 1938-1944 City Directories).

Paul Hamlen died in July of 1939, and on August 19, 1944, his son, Nathaniel Hamlen, as the successor trustee under Nathaniel Hamlen’s will, transferred 32-34-36-38 Fairfield to the Warren Institution for Savings, which held the mortgage on the property. On August 30, 1944, the property was acquired by real estate dealer George T. Sullivan.

On May 10, 1946, 32-34-36-38 Fairfield were acquired from George Sullivan by Joseph Francis Dinneen. He was a reporter with the Boston Globe, noted for his crime coverage and for his column on Boston’s night club scene. He also was a prolific author, Among his works was The Purple Shamrock, a biography of Mayor James Michael Curley published in 1949. He and his wife, Helen Agnes (Wagner) Dinneen, lived in Needham.

The property continued to be operated as lodging houses.

On April 12, 1957, 32-34-36-38 Fairfield were acquired from National Realty by real estate dealers Stuart H. Hastings and Joseph A. Gautreau. They converted each building into eight apartments and then sold them separately: 32 Fairfield and 34 Fairfield to two different buyers, and 36 Fairfield and 38 Fairfield to a third buyer.

On February 14, 1958, 32 Fairfield was acquired from Stuart Hastings and Joseph Gautreau by George M. Shields and his wife, Ethel M. (Bragg) Shields. They lived in Everett and later in Melrose.

The property changed hands and on May 28, 1976, was acquired by Eliot Convisor, trustee of the Spencer Realty Trust. In September of 1980, he purchased 34 Fairfield.

In April of 1981, he applied for (and subsequently received) permission to legalize the occupancy of 32 Fairfield as six apartments and one office, indicating that was an existing condition.  He also received permission to cut doors through the party wall connecting 32 and 34 Fairfield.