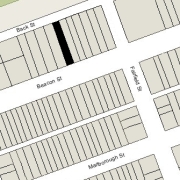 346 Beacon is located on north side of Beacon, between Fairfield and Gloucester, with 344 Beacon to the east and 348 Beacon to the west.

346 Beacon was designed by Allen and Kenway, architects, and built in 1882-1883 by L. P. Soule, mason, and Leander Greeley, carpenter, as the home of Lucien Carr, assistant curator of the Peabody Museum at Harvard, and his wife, Cornelia Louisa (Crow) Carr. The property was numbered 344 Beacon until 1889.

Lucien Carr is shown as the owner of 346 Beacon on the original building permit application, dated November 1, 1880.

Cornelia Carr purchased the land for 346 Beacon from Charles W. Amory on July 10, 1882. It was the eastern half of a 50 foot wide lot he had purchased from the Boston and Roxbury Mill Corporation on January 26, 1881.

Click here for an index to the deeds for 346 Beacon, and click here for further information on the land on the north side of Beacon, including the Storrow Memorial Embankment on the Esplanade.

By the 1883-1884 winter season, Lucien and Cornelia (Crow) Carr had made 346 Beacon their home. They previously had lived at 299 Marlborough. They also maintained a home, The Ledge, in Bar Harbor.

During the 1886-1887 winter season, the Carrs were living elsewhere and 346 Beacon was the home of attorney Solomon Lincoln and his wife, Ellen B. (Hayden) Lincoln. They previously had lived at 241 Boylston. They also maintained a home in Petersham, Massachusetts. By the next season, they were living at the Hotel Brunswick (southeast corner of Boylston and Clarendon).

The Carrs resumed living at 346 Beacon during the 1887-1888 winter season, and continued to live there until 1889, when they moved to Cambridge.

On April 25, 1889, 346 Beacon was purchased from Cornelia Carr by Harrison Parker Bridge. He lived on his own income, having received a substantial inheritance from his father, Hudson Erastus Bridge, a stove manufacturer and railroad president in St. Louis.

Harrison Bridge married in October of 1889 to Caroline Gardner Tobey. After their marriage, they made 346 Beacon their home. They also maintained a home in Bar Harbor.

Harrison Bridge died in August of 1895 at the Palace Hotel in San Francisco, returning to Boston after a tour of the Orient. Caroline Bridge moved from 346 Beacon soon thereafter.

By the 1895-1896 winter season, 346 Beacon was the home of Frank Clough Miles and his wife, Elvira (Cross) Miles. They previously had lived in Brookline. They also maintained a home, Mount Lake Farm, in Londonderry, Vermont.  They continued to live at 346 Beacon until December of 1896.

Frank Miles was treasurer of the Boston Safe Deposit and Trust Company.  In December of 1896, he was found to have embezzled about $150,000, and disappeared.  In August of 1905, he was thought to have been discovered in Cape Town, South Africa, but it is unclear whether he was successfully arrested.

On September 5, 1899, 346 Beacon was purchased from Caroline Bridge, by then a resident of Providence, by Ella (Merrihew) Chase, the wife of Sidney Chase. They lived at 447 Beacon, and moved to 346 Beacon in the spring of 1900, Ellen Chandler’s lease having concluded at the end of March.

Sidney Chase was a stockbroker and investment banker, and later would become treasurer of the Boston Stock Exchange.

Ella Chase died in April of 1909.  Sidney Chase continued to live at 346 Beacon during the 1910-1911 winter season, but moved thereafter to 244 Marlborough to live with his son-in-law and daughter, Dr. William Phillips Graves and Alice Myrick (Chase) Graves.

By the 1916-1917 winter season, it was the home of Dr. William Edwards Ladd, a physician and pediatric surgeon, and his wife, Helen Katharine (Barton) Ladd. They previously had lived at 42 Gloucester. They continued to live at 346 Beacon during the 1918-1919 winter season, but moved thereafter to 326 Dartmouth.

On September 23, 1919, 346 Beacon was purchased from Sidney Chase and his daughter, Alice Graves, by real estate dealer Mark Temple Dowling. He and his wife, Florence N. (Williams) Loizeaux Dowling, made it their home. They previously had lived at the Hotel Somerset.

They were divorced in 1921. He remarried in July of 1921 to Helen Lee (Lemly) Powers, the former wife of Leslie C. Powers. After their marriage, they lived in New York City.

On July 29, 1921, the New England Trust Company foreclosed on its mortgage to the Sidney Chase and Alice Graves, which had been assumed by Mark Temple Dowling when he bought the house, and took possession of the property.

The property changed hands and on February 12, 1924, was acquired by Eliza Jane (Montgomery) Brown, the widow of Benjamin Wesley Brown. She lived in Brookline.

The property changed hands again and on February 21, 1925, was acquired by Fred C. Hald, a dealer in automobile accessories. He was unmarried and lived in Jamaica Plain.

In 1925, 346 Beacon was leased by Walter Franklin Prince as his home and the location of the Boston Society for Psychical Research, which he founded in that year.

In November of 1929, the New England Bond and Mortgage Company filed for (and subsequently received) permission to remodel the interior, indicating that the current and proposed use would be as “dwelling and commercial.”  On the application, it indicated that the building has been occupied “1 floor research work, 2 floor studios, 3 floor habitation, 4 floor will be studios.”

The Boston Society of Psychical Research remained at 346 Beacon until about 1932.  Other tenants included the Hanson & Walsh photography studio, the studio of artist Joseph G. Cowell, and a number of residents.

On January 18, 1932, the Massachusetts Hospital Life Insurance Company foreclosed on its first mortgage on 346 Beacon, given by Eliza J, Brown in April of 1924 and assumed by subsequent owners.

On November 14, 1933, the Building Department conducted an inspection of 346 Beacon and found that there were 11 living units with numerous safety violations.

In January of 1934, Massachusetts Hospital Life asked the Building Department to “defer action against the building” until it had an opportunity to submit plans and an application to bring it into compliance. Later that month, it applied for (and subsequently received) permission to convert the property into nine apartments.

On May 1, 1934, 346 Beacon was acquired from Massachusetts Hospital Life by Margery (Marguerite) (Power) Dalton, the wife of Harold Caleb Dalton, a dealer in electrical supplies. They lived in one of the apartments and rented the rest. They previously had lived in an apartment at 391 Beacon.  Their daughter, Doris Dalton, was a stage and television actress.

Harold Dalton died in December of 1944. Margery Dalton continued to live at 346 Beacon until her death in 1967. 346 Beacon was inherited by their three daughters: Doris (Dalton) Sonnekalb Savage, the wife of David D. Savage; Madolan (Dalton) Rowley, the wife of Harry William Rowley, Jr., and Beatrice (Dalton) Van Voorhis, the wife of Stanley Nichols Van Voorhis.

On July 26, 1971, 346 Beacon was purchased from Harold and Margery Dalton’s daughters by real estate dealer Earl Carnes Munn, who lived in one of the apartments. He previously had lived at 57 Commonwealth.