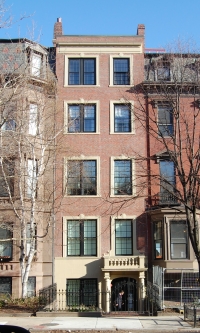 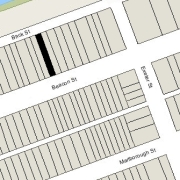 302 Beacon is located on the north side of Beacon, between Exeter and Fairfield, with 300 Beacon to the east and 304 Beacon to the west.

302 Beacon was built 1869-1870 for real estate dealers Samuel Horatio Whitwell and his brother, Henry Whitwell, for speculative sale, one of two contiguous houses (300-302 Beacon) designed as a matching pair. 302 Beacon was significantly remodeled in 1932.

Click here for an index to the deeds for 302 Beacon, and click here for further information on the land on the north side of Beacon, including the Storrow Memorial Embankment on the Esplanade.

On October 1, 1870, 302 Beacon was acquired by Samuel P. Dexter and Henry C. Wainwright, trustees under a trust established by Edward Frothingham in July of 1858. They transferred it to Francis Ware on October 25, 1871, and on the same day, it was acquired from him by Robert Shaw Sturgis, trustee for the benefit of Josephine (Borrás) Sturgis Santayana, the widow of George Sturgis and the wife of Agustin Santayana (from whom she was separated). Robert Shaw Sturgis was the brother of her deceased first husband.

On December 7, 1875, Robert S. Sturgis transferred the property to Susan, Josephine, and Robert Sturgis, they all having attained the age of 21.

Josephine Santayana and her children continued to live at 302 Beacon during the 1880-1881 winter season, but moved thereafter to 26 Millmont.

On September 15, 1881, 302 Beacon was acquired from Susan, Josephine, and Robert Sturgis by Sarah E. (French) Allen, the widow of iron and steel merchant Stephen G. Allen. She previously lived n Andover, where her husband had died in October of 1878.

During the 1882-1883 winter season, Mrs. Allen was living elsewhere and 302 Beacon was the home of Henry Clay Sherburne and his wife, Catherine (Kate) Augusta (Adams) Sherburne.  He was president of the Northern Railroad and the New York & Boston Dispatch Express Company, and sole trustee of the Hinkley Locomotive Works.  Their usual residence was in Concord, New Hampshire.

Sarah Allen resumed living at 302 Beacon during the 1883-1884 winter season, but moved thereafter.

On June 26, 1884, 302 Beacon was acquired from Sarah Allen by William Dean Howells. He and his wife, Elinor (Mead) Howells, made it their home. They previously had lived at Redtop in Belmont, which had been designed by Elinor Howells’s brother, architect William Rutherford Mead.

William Dean Howells was former editor of the Atlantic Monthly and a prolific and popular author.  The Rise of Silas Lapham, one of his best known works, was published in 1885 while he was living at 302 Beacon.

During the 1885-1886 winter season, the Howellses were living abroad and 302 Beacon was the home of Mrs. H. E. Bridge, probably Helen A. (Holland) Bridge, the widow of Hudson Erastus Bridge, a stove manufacturer and railroad president in St. Louis, where she previously had lived.  She moved by the 1886-1887 winter season, and by the 1887-1888 season probably was living at 148 Commonwealth.

William and Elinor Howells resumed living at 302 Beacon by mid-1886, and on August 23, 1886, the Boston Globe published an interview with him, including an extensive description of the house:

“The Howells residence is one of a block. It is of red brick, with brownstone trimmings. The entrance is reached by a long flight of stone steps. The whole front is nearly covered by a green clinging vine, festoons of which overhang the front door and serve to screen it from the sun, as the house has a full southern exposure. There is a small grass plat in front, such as is usual to city houses. The grass is closely cut, it is not surrounded by any railing and looks all the prettier for it.

“The front door opens into a large, square hall, with wide oaken staircase extending above. Here everything looks inviting. Rugs are upon the floor, a hall table, on which is a small tray filled with visitors’ cards, stands near the door, and a mirror hangs above. In front is a reception-room, prettily and comfortably furnished, the prevailing color red, which harmonizes well with the oak finishings and wood work. Beyond and across the hall is the dining room, which looks out on Mr. Howells’ flower garden. The woodwork of this room is also of oak. Engravings hang upon the walls, and, altogether, it presented a cheerful picture, heightened by the shining light on decanters, wine glasses and silver on a massive oak sideboard. …

“Over the reception room is a parlor the full width of the house; no antique furniture or attempt to carry out a distinctive period in furnishing, only a comfortable, perhaps more, a luxurious home; carpets of a light color, with bright figures, and handsome upholstered furniture.

“The staircase winds through the centre of the house, leaving much hall space. At the back of the house on the second floor is Mr. Howell’s study. …The room is large and square, filled with light from a large window; all around are books and papers, several engravings and etchings hang upon the walls, but no paintings. Authors seldom care for color pictures. In the centre of the room is a large writing-table with green baize top, littered with pens, papers, penwipers, stationery, and all the offs and ends of a real work-table. A leather-cushioned arm-chair is before the table.”

William and Elinor Howells lived at 302 Beacon during the 1886-1887 winter season, but moved soon thereafter.  On May 11, 1889, the Boston Globe reported that they were “coming back to Boston to live” and were staying temporarily at the Hotel Vendome.  By the 1890-1891 winter season, they lived in an apartment at 184 Commonwealth.  By the 1891-1892 season, they had moved to the Hotel Berkeley (southeast corner of Berkeley and Boylston), and soon thereafter they moved to New York City.

On April 30, 1887, 302 Beacon was purchased from William Howells by Edwina (Booth) Grossman, the wife of stockbroker Ignatius R. Grossman. They previously had lived at 29 Chestnut with her widowed father, Edwin Thomas Booth, the noted Shakespearean actor (brother of Lincoln’s assassin, John Wilkes Booth).

On October 16, 1887, the Table Gossip column in the Boston Globe commented that “Mrs. Grossman (Edwina Booth) is redecorating Mr. Howell’s house on the water side of Beacon street, which her father has bought for her, as it was severely plain during the Howells occupancy.  Mr. Booth will retain the Chestnut street house for his own use.”

The Grossmans continued to live at 302 Beacon during the 1889-1890 winter season, but moved thereafter to New York City. Edwina Grossman continued own 302 Beacon and lease it to others.

By June of 1900, 302 Beacon was the home of Dr. John Bapst Blake and his wife, Anne (Hastings) Blake.  They had married in October of 1899 and 302 Beacon probably was their first home together.  Prior to their marriage, he had lived at 212 Beacon with his parents, John George Blake and Mary Elizabeth (McGrath) Blake.

John Bapst Blake was a physician and surgeon.  He maintained his practice at 212 Beacon with his father and brother, Gerald Blake.  He later would become surgeon-in-chief at Boston City Hospital and a professor of surgery at Harvard Medical School.

By the 1905-1906 winter season, it was the home of Dr. John Preston Sutherland and his wife, Evelyn Greenleaf (Baker) Sutherland.  They previously had lived in an apartment at 295 Commonwealth.

John Sutherland was a physician and Dean of the Boston University Medical School. Evelyn Greenleaf Sutherland was a journalist, author, and playwright, often writing under the name Dorothy Lundt.

Evelyn Sutherland died in December of 1908, a victim of heart failure after her clothing caught fire from an open gas heating stove.  John Sutherland continued to live at 302 Beacon in 1910, but moved soon thereafter back to an apartment at 295 Commonwealth.

The house was not listed in the 1911 Blue Book.

In March of 1911, 302 Beacon was purchased from Edwina Grossman by Dr. Malcolm Storer, a physician. He and his wife, Grace (Ayrault) Storer, made it their home. They previously had lived at 5 Brimmer. They also maintained a home in Islesford, Maine.

In May of 1929, 302 Beacon was acquired from Malcolm Storer by real estate dealer Henry C. Brookings. The property changed hands, including going through foreclosure, and in March of 1932 was acquired by Louis J. Binda. He was an elevator starter at a downtown Boston building who frequently held property for various other owners. He was unmarried and lived in Roxbury.

In June of 1932, Edmund Binder (probably a misreading of Louis Binda) applied for permission to convert the house from a single-family dwelling into five apartments, including removing a wooden ell at the rear and building a new front elevation.

That same month, 302 Beacon was acquired by Allen Payson Saul (born Abraham Salinsky). He was a chiropodist and operated the Allen Payson Company, dealers in elastic stockings. He was unmarried. He previously had lived at 1680 Commonwealth in Brighton.

In July of 1932, Allen Saul re-applied for (and subsequently received) permission to convert the property into five units, remodeling it the manner proposed in the earlier permit application. The remodeling was designed by architect Parker J. Brown.

By 1934, Allen Saul had been joined at 302 Beacon by his sister, Della Saul (the former wife of George Lapidus), and her son, Robert Jason (Lapidus) Saul.  She also was a chiropodist and operated Caporn Correct Corsetry conjunction with her brother’s elastic stockings business.  In December of 1934, Allen Saul transferred 302 Beacon to Della Saul.

In October of 1936, 302 Beacon was acquired from Della Saul by Theodore W. Berenson, trustee of the Beaconson Trust, a real estate investment trust. He and his wife, Evelyn Harriet (Green) Berenson, lived in Brookline and then Newton.

In June of 1944, 302 Beacon was acquired by Charles Stevens of Lydonville, Vermont.

In October of 1946, 302 Beacon was acquired from Charles Stevens by Lawrence Rill Schumann, a brush manufacturer. He and his wife, Ruth D. (Levine) Schumann, lived in Forest Hills, Long Island.

At about the same time, Lawrence and Ruth Schumann separated and he moved from New York to an apartment at 302 Beacon. They divorced in 1950.

In the early 1950s, Lawrence Schumann purchased the art collection of Mrs. Marie (Walther) Sterner Lintott, an art dealer in New York City, including about 300 American and European paintings, water-colors, and drawings. In November of 1951, he purchased 191 Marlborough, possibly with the idea of housing the collection there, which he may have done. While he owned the house, it was shown as vacant in City Directories and was not included in the Lists of Residents.

By mid-1952, Lawrence Schumann had married again to Mrs. Edith (Rader) Jarcho, the former wife of Saul Jarcho. After their marriage, they lived at 302 Beacon.

In October of 1957, Lawrence Schumann, as trustee for his daughter, acquired 302 Beacon once again and, on the same day, transferred it to Patricia A. Risser of Somerville, who held the property on his behalf.

From 1960 to 1966 he served as honorary Austrian Consul General in Boston.

In October of 1971, Patricia Risser transferred the property to Laurel Schumann, at that time a resident of Hollywood.

Lawrence and Edith Schumann continued to live at 302 Beacon until about 1974. By the time of his death in October of 1975, they were living in an apartment at 330 Beacon.

In November of 1974, 302 Beacon was purchased from Laurel Schumann by John L. Hayden.

The property changed hands and in September of 1995 was purchased by Louis James Wiczai, Jr., an executive with Brigham and Women’s Hospital, and his wife, Karen K. Kirby.

In October of 1996, they converted it into two condominium units: the Rockland Boston Condominium.