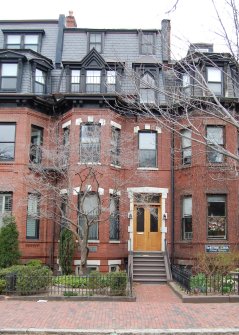 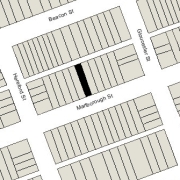 Click here for an index to the deeds for 347 Marlborough, and click here for further information about the land between the north side of Marlborough and Alley 415, from Gloucester to Hereford. 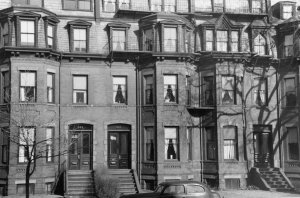 By 1876, 347 Marlborough was the home of hardware merchant Charles Francis Dowse and his wife, Lucy Ada (Howes) Dowse.  They had married in November of 1875, and 347 Marlborough probably was their first home together.

The Dowses continued to live at 347 Marlborough during the 1903-1904 winter season, but moved thereafter to 340 Commonwealth. 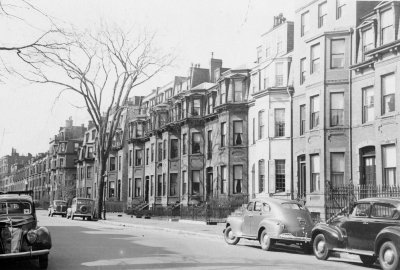 By the 1904-1905 winter season, 347 Marlborough was the home of Dr. Robert Bayley Osgood and his wife, Margaret (Chapin) Osgood.  They previously had lived in an apartment at 409 Marlborough.

Robert Osgood was an orthopedic surgeon.   He was Chief of Orthopedic Staff at Children’s Hospital and an instructor at Harvard Medical School.  He maintained his medical office at 372 Marlborough.

Dr. Robert Henry Vose, a physician, also lived at 347 Marlborough and maintained his medical office there.  In 1904, he had lived at The Marlborough at 416 Marlborough.

On May 29, 1909, 347 Marlborough was acquired from Joseph McIntire’s heirs by the First Church of Boston (Berkeley at Marlborough).

347 Marlborough became the home of Rev. Charles Edwards Park, minister of the First Church of Boston, and his wife, Mary Eliot (Turner) Park. They previously had lived in an apartment at 405 Marlborough.  They also maintained a home in Peterborough, New Hampshire.

Charles Park was minister of the First Church of Boston until his retirement in 1946, when he was named Minister Emeritus.

The Parks continued to live at 347 Marlborough for the rest of their lives.  She died in January of 1960, and he died in September of 1962.

On December 17, 1962, the Unitarian Christian Fellowship acquired 347 Marlborough from the First Church in Boston.

In April of 1963, the Unitarian Christian Fellowship applied for (and subsequently received) permission to “modernize” the front entrance.  The revised entrance was built of wood, with a triangular pediment, and painted white.  It may have been at this time that portions of the masonry also were painted white.

By 1964, 347 Marlborough was the office of the Unitarian Christian Fellowship and also the home of its director, Rev. Ronald Michael Mazur, and his wife, Joyce Elizabeth (Mann) Mazur.

The house remained the Fellowship’s offices until the mid-1970s. It also was the residence of subsequent directors of the Fellowship.

On June 26, 1978, 347 Marlborough was acquired from the Unitarian Christian Fellowship by Charles C. Stuart and his wife, Sarah W. Stuart. In September of 1979, they filed for (and subsequently received) permission to convert the property from a single-family dwelling into three apartments, and also to construct a greenhouse at the rear of the building.

On January 18, 1980, they converted the property into three condominium units, the Charles E. Park Condominium.

In April of 2018, the condominium owners applied for (and subsequently received) permission to restore the front entrance to approximate the original appearance and to install lighting on either side of the entrance.  The entrance and masonry remained painted white.