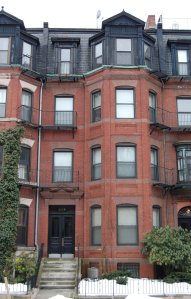 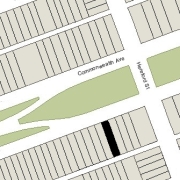 On September 24, 1883, 324 Commonwealth was purchased from George Wheatland, Sr., by Augustus P. Martin. He and his wife, Abbie F. (Peirce) Martin, made it their home. They previously had lived at 102 West Chester Park.

Augustus P. Martin was a manufacturer and wholesale dealer in boots, shoes, and leather. He had served as an artillery captain during the Civil War, receiving the rank of brevet Colonel in 1865. In November of 1882, He was commissioned a brigadier general on the staff of Governor John Davis Long in recognition of his service during the war. He subsequently was known as General Martin.

In 1884, he served as Mayor of Boston, failing to win re-election the next year.

On December 4, 1886, Augustus Martin assigned all of his property to Edward L. Pickard as trustee for the benefit of his creditors. In a December 5, 1884, Boston Globe article, he indicated that the cause of his firm’s failure was “through lack of proper attention to our business, as we have entrusted our business matters to others, and have paid very little attention to it ourselves for the past few years.” The Globe noted that he “expressed his willingness to part with his beautiful residence and do all in his power to satisfy his creditors.”

The Martins continued to live at 324 Commonwealth during the 1889-1890 winter season, but moved thereafter to Dorchester.

By the 1890-1891 winter season, 324 Commonwealth was the home of Hannah E. Gilman and Julia R. Gilman, sisters who operated a Home and Day School for Girls at the house. They previously had lived at 44 Rutland Square, where they also had operated their school. By 1892, the Gilman sisters had renamed their school to be The Commonwealth Avenue School.

In January of 1896, Ralph H. White proposed building a five-story plus basement stable across the alley on a 67 foot wide lot at 325-327-329 Newbury owned by Samuel H. Whitwell and his siblings, Sophia L. Whitwell and Frederick A. Whitwell, also a real estate dealer. The stable would have accommodated 50 teams of horses and associated delivery wagons for Ralph White’s dry goods business, R. H. White & Co. As reported by the Boston Globe on January 28, 1896, the Whitwells agreed to sell the property on Newbury on the condition that Ralph White also acquire 324 Commonwealth. The proposal was widely opposed by nearby residents and was denied. In December of 1896, Samuel Whitwell proposed a “club stable” to accommodate 40 horses on the Newbury property. It was again opposed by nearby residents and was denied by the Board of Health. Subsequently, smaller private stables were built: in 1898 at 327 and 329 Newbury for Samuel H. Whitwell, and in 1899-1900 at 325 Newbury for Albert C. Burrage, who built his home at 314 Commonwealth at the same time).

Samuel H. Whitwell continued to own 324 Commonwealth and to lease it to Hannah and Julia Gilman.

During the 1900-1901 winter season, the Gilman sisters were traveling in Europe and Miss Fannie Carleton Guild assumed responsibility for the school. She previously had been associated with the Dana Hall School in Wellesley. She remained at The Commonwealth Avenue School after their return and, by 1905, she and Julia Gilman were serving as its principals.

Fannie Guild and Hannah and Julia Gilman continued to live at 324 Commonwealth in 1909, but by 1910 the Misses Gilman had moved to Brookline to live with their sister, Sarah (Gilman) Pulsifer, the widow of William Pulsifer.

Fannie Guild continued to live and operate the school at 324 Commonwealth until about 1911.  By 1912, she had moved to 29 Fairfield, where she operated a girls school with Jeannie (Jennie) Carter Evans.

By the 1911-1912 winter season, 324 Commonwealth was the home of Charles Henry Bingham, a railroad conductor, and his wife, Elizabeth (Mead) Bingham, who operated it as a lodging house.  They previously had lived at 142 Beacon, where they also had operated a lodging house.

On March 20, 1913, 324 Commonwealth was purchased from Frederick Whitwell and Natalie Whitwell by real estate dealer Walter Stanley Tripp, and on November 29, 1913, it was acquired from him by former Massachusetts Governor and US Secretary of the Navy John Davis Long (who, in 1882, had named Augustus Martin a brigadier general on his staff). He continued to lease the property to the Binghams.

From November of 1916 to January of 1917, 324 Commonwealth was the “campaign headquarters” and residence of Rev. Billy Sunday and his wife during their Boston evangelical crusade.

The Binghams continued to live and operate a lodging house at 324 Commonwealth until 1923, when they moved to 380 Commonwealth.

John D. Long had died in August of 1915 and 324 Commonwealth had continued to be owned by his estate.

On April 20, 1923, 324 Commonwealth was acquired from John D. Long’s estate by Laura Logan, acting as conveyancer, and on May 15, 1923, it was acquired from her by Mary (Marion) (Montague) Keyes, the wife of John H. Keyes. John and Mary Keyes continued to operate it as a lodging house. Their son, Bernard Montague Keyes, an artist and art teacher, lived with them.  They previously had lived in Brookline.

In October of 1923, Mary Keyes applied for permission to construct a garage at the rear of the house.  Her application was denied by the Boston Street Commission.

The Keyes continued to live at 324 Commonwealth until about 1927.

In February of 1927, the Council for Greater Boston Camp Fire Girls announced the purchase of 324 Commonwealth as their headquarters. The February 27, 1927, Boston Globe article on their purchase indicated that “the street floor with its two living rooms adjoining, kitchen, dining room, and the laundry in the basement, are to be made into a model home where Camp Fire Girls will be trained in ‘social graces and perfect home making.’ A floor above will be used by the resident directors of the movement and three stories will be rented to provide additional income.”

The title was transferred from Mary Keyes to the Council on May 2, 1927.

Among the residents of 324 Commonwealth was Miss Lotta A. Clark, president of the Camp Fire Council. She was a professor at the Teachers College of the City of Boston. Her mother, Addie (Huston/Hustis) Clark, the widow of Rufus M. Clark, her sister, Sadie (Sally) Elizabeth (Clark) Lawrence, the widow of Leonard Lawrence, and the Lawrences’ son, Leonard Frederick Lawrence, lived with her. They all previously had lived in Brookline. They continued to live at 324 Commonwealth until about 1933.

During the 1927-1928 winter season, 324 Commonwealth also was the home of Charles Curtis Allen, a noted landscape artist, and his wife, Frances (Sandra) Woodland Allen. Living with them were Sarah Woodland, Frances Allen’s daughter by her first marriage, to Frank O. Woodland, and Sarah L. Gibbs, Sarah Allen’s first first cousin, daughter of Alfred Gibbs and Annie (Parker) Gibbs (Sarah Allen’s maternal aunt). They all previously had lived at 110 Charles. They had moved by the next season, and by 1930 were living in Newton.

The Camp Fire Girls continued to occupy 324 Commonwealth until about 1932.

On July 15, 1933, the Home Savings Bank foreclosed on a mortgage it held on 324 Commonwealth and took possession of the property.

In October of 1935, Parker & Phillips, real estate dealers in Brookline, applied for (and subsequently received) permission to remodel the interior of 324 Commonwealth and convert it from a club into nine apartments. The remodeling was designed by architect Saul E. Moffie. Plans for the remodeling — including elevations and floor plans — are included in the City of Boston Blueprints Collection in the Boston City Archives (reference BIN P-131).

By 1937, 324 Commonwealth was occupied by the Boston Speech School for Crippled Children and the Copley School of Expression, operated by Mrs. Emma Louise (Grinnell) Tunnicliff, the former wife of Dr. Edmund Harrison Tunnicliff, Jr. She also lived at 324 Commonwealth.  The schools previously had been located (and she had lived) at 408 Beacon.

In 1941, an inspection by the Building Department indicated that there was insufficient egress to permit the building to be used for a school.  The school moved from 324 Commonwealth by mid-1941.

324 Commonwealth was shown as vacant in the 1942 City Directory.

On June 8, 1942, 324 Commonwealth was acquired from the Home Savings Bank by Samuel J. Harris.

By 1943 it was occupied as an apartment house.

The property changed hands and on March 29, 1946, was acquired by Edith E. (Fitzgerald) Colantino, the wife of Dr. George J. Colantino, a physician. They lived in Medford.

On June 13, 1947, 324 Commonwealth was acquired from Edith Colantino by Nils Smeland and his wife, Grace Christine (Goudas) Smeland. They lived at 26 Hemenway.

In September of 1947, Nils Smeland applied for (and subsequently received) permission to convert the property from nine apartments into five apartments. Plans for the remodeling, designed by architect Saul Moffie, are included in the City of Boston Blueprints Collection in the Boston City Archives (reference BIN R-83).

On October 31, 1947, John Francis Prendiville, an accountant in Worcester (shown on the deed as Jack Prenderville), acquired a one-half undivided interest in 324 Commonwealth.

On February 16, 1950, George and Edith Colantino re-acquired the property from the Smelands and John Prendiville. The Colantinos had purchased 300 Commonwealth in October of 1949, and lived there in one of the apartments.  In July of 1952, they purchased and subsequently moved to 404 Beacon.

324 Commonwealth changed hands and on September 6, 1957, was acquired by Yale Goldman and his wife, Norma (Basil) Goldman. They lived in Newton. He was district manager for the Penn Mutual Life Insurance Company. In March of 1959, they also acquired 326 Commonwealth.

On July 15, 1960, 324 Commonwealth was acquired from the Goldmans by Charles W. Easter and his wife, Mary P. (Coleman) Easter. In November of 1960, Charles Easter applied for (and subsequently received) permission to convert the property into a seven unit apartment house, which he indicated was the existing condition when he acquired the property.

324 Commonwealth remained an apartment building in 2021.