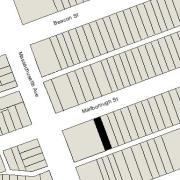 406 Marlborough was designed by Shaw and Hunnewell, architects, and built in 1888-1889 by Hezekiah McLaughlin, mason, and McKenzie & Hersey, carpenters, as the home of cotton broker Frederic Dexter and his wife, Susan (Chapman) Dexter. He is shown as the owner on the original building permit application, dated March 30, 1888, and on the final building inspection report, dated May 30 1889 (a water-damaged plan of the first floor is bound with the building inspection report, located in the Boston City Archives).

Frederic Dexter purchased the land for 406 Marlborough on January 7, 1888, from Benjamin Williams Crowninshield and Walter Channing Cabot. It was part of a parcel with a 498 foot frontage on Marlborough, extending west to Massachusetts Avenue, that they had acquired on January 20, 1880, from John Brooks Fenno and William Storer Eaton. J. Brooks Fenno and William Eaton had purchased the land that same day from Grenville T. W. Braman, Henry D. Hyde, and Henry M. Whitney, trustees of a real estate investment trust that had purchased several parcels of land on March 1, 1872, from the Boston Water Power Company.

The land owned by the trust originally had been divided by Parker Street, a 60 foot wide street located on top of the Cross Dam, which ran southwest from Beacon at approximately a 45 degree angle, intersecting the south side of Marlborough at a point about 394 feet west of Hereford. After the street was discontinued as a public thoroughfare in 1877, Grenville Braman and his partners acquired the roadway and the land beneath it, and combined it with their other property. The houses at 396-398-400-402-404-406 Marlborough were partially built on land that previously had been Parker Street, with the Cross Dam below.

Click here for an index to the deeds for 406 Marlborough, and click here for further information on the land on the south side of Marlborough between Hereford and Massachusetts Avenue.

By the 1889-1890 winter season, Frederic and Susan Dexter had made 406 Marlborough their home. They previously had lived at 1 Spruce.

Frederic Dexter died in March of 1895.  Susan Dexter continued to live at 406 Marlborough.

In 1897, she was living elsewhere and 406 Marlborough was the home of Col. Henry Sturgis Russell and his wife, Mary Hathaway (Forbes) Russell. They previously had lived at 357 Beacon. They also maintained a residence, Home Farm, in Milton.  Col. Russell had been named Boston Fire Commissioner in January of 1895, after which he maintained a residence in Boston as well as in Milton. He formerly had been a shipping merchant in the East India and China trade in his father-in-law’s firm, John Murray Forbes & Co., and had served as president of the Continental Telephone Company.  By 1898, they had moved to 24 Commonwealth.

Susan Dexter continued to live at 406 Marlborough. By the 1907-1908 winter season, she had been joined by her niece, Eliza Chapman Post, the daughter of Jothan William Post and Eliza (Chapman) Post. Eliza Post previously had lived in Brookline with her widowed mother, who died in November of 1906.

During the 1908-1909 winter season, they were living elsewhere and 406 Marlborough was the home of stockbroker Alfred Codman and his wife, Lydia Emmet (Eliot) Codman.  They also maintained a home in Nahant.  They previously had lived at 459 Beacon.  By the 1909-1910 winter season, they had moved to 211 Beacon and Susan Dexter and Eliza Post had resumed living at 406 Marlborough.

Susan Dexter died in February of 1917. She and her husband had no children, and she left 406 Marlborough to her nieces and nephews.

By 1920, 406 Marlborough was the fraternity house of the MIT Chapter (Delta Chapter) of Theta Xi. It previously had been located at 164 Rawson Road in Brookline. It remained at 406 Marlborough until 1923, when it moved to 465 Commonwealth.

On April 2, 1923, 406 Marlborough was acquired from James M. Burr by Dr. Walter G. McGauley, a dentist, who maintained his offices there and at 1746 Washington Street. He lived in Jamaica Plain.

In August of 1923, he applied for (and subsequently received) permission to convert the property from a single-family dwelling into medical offices.

He continued to maintain his offices there in 1924.  By 1925, he had been joined there by his brother, Frank H. McGauley, also a dentist, who also lived in Jamaica Plain.  Several other doctors and dentists also maintained offices there, and it also was the home of three teachers: Alice W. Clark, Mary G. Harvey, and Dorothy Wilkinson.

In 1925, Walter McGauley was an unsuccessful candidate for Mayor of Boston.

During the winter of 1925-1926, he was taken to court for failing to provide sufficient heat for his tenants.

Among the tenants at 406 Marlborough in 1926 were Richard Rogers Peabody and his wife, Ethel Jane (born Ethel May and called Jane) (McKean) Peabody. The previously were lodgers at 465 Beacon. A recovered alcoholic, Richard Peabody was a therapist who specialized in the treatment of alcoholism. His first wife, from whom he divorced in February of 1922, was Mary (Polly) Phelps Jacob. Prior to their marriage, she had invented the first brassiere, for which she held a patent. She remarried in September of 1922 to Harry Crosby of 304 Berkeley. They moved to Paris, where they founded the Black Sun Press, an English language press that published the works of many of the modernist authors of the day, including James Joyce, D. H. Lawrence, and others.

By 1927, Richard and Jane Peabody had moved to 25 Marlborough.

On May 1, 1926, Gertrude Allyn (Rexford) Bristol, the wife of Bennet Beri Bristol, foreclosed on a mortgage given by Walter McGauley and took possession of the property.

Gertrude Bristol died in May of 1930, and on January 1, 1932, Evelyn Bristol transferred 406 Marlborough to her father and the Foxboro National Bank as trustees under her mother’s will. On December 31, 1938, they transferred the property to The Bristol Trust, Inc. 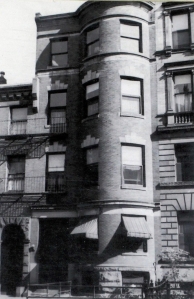 406 Marlborough continued to be medical offices and several residential units.

By 1929, it was the home of Myron H. Smith, a public utility engineer, and his wife, Claire H. Smith. They previously had lived at 463 Commonwealth.

The Smith continued to live at 406 Marlborough until about 1937, when they moved to Medfield.

On June 21, 1939, 406 Marlborough was acquired from The Bristol Trust, Inc., by the Stiles Realty Corporation.

The property changed hands and on October 29, 1953, was acquired by Hyman Wald, trustee of the Wald Realty Trust. In April of 1954, he applied for (and subsequently received) permission to legalize the occupancy as five apartments and two offices, which he indicated was the existing condition.

On July 2, 1956, 406 Marlborough was acquired from Hyman Wald by Miss Susie Dorothy Wallace of Washington DC. In March of 1957, she applied for (and subsequently received) permission to legalize the occupancy as eight apartments, which she indicated was the existing condition when she purchased the property. She married in October of 1959 to Ivan Frank, also of Washington DC.

On June 13, 1960, 406 Marlborough was purchased from Susie (Wallace) Frank by real estate dealer and contractor Michael J. Smith. He and his wife, Georgia Constance (Rigas/Rigopoulos) Smith lived at 322 Marlborough. On July 18, 1960, they transferred the property to the Romik Realty Corporation, which subsequently became Michael J. Smith, Inc.

The property changed hands, and on April 6, 1966, was acquired by the E. E. Harrington and Squire Realty Corp. (Richard S. Kates, treasurer). On April 11, 1966, it transferred the property to Richard S. Kates and Eliot Conviser as trustees of the 21 Melrose Street Realty Trust.

On April 13, 1967, 406 Marlborough was acquired from Richard Kates and Eliot Conviser by Mark Smith and Donald O. Anderson, trustees of the Friendship Realty Trust.

On June 26, 1975, 406 Marlborough was purchased from the Friendship RealtyTrust by Rolf Thorstein Smedvig. He lived in an apartment at 194 Marlborough.

On January 29, 1998, 406 Marlborough was purchased from Rolf Smedvig by the Madeira Isle Real Estate Corporation (Daniel Silva, president and treasurer). In February of 1998, it applied for (and subsequently received) permission to convert the property from eight apartments into four apartments.