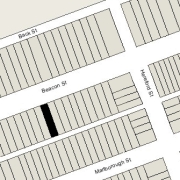 459 Beacon is located on the south side of Beacon, between Hereford and Massachusetts Avenue, with 457 Beacon to the east and 461 Beacon to the west.

Asa Caton purchased the land for 455-457-459-461 Beacon on July 1, 1886, from architect John Hubbard Sturgis. The lot was part of a parcel John H. Sturgis had assembled through three purchases in January and February of 1880, comprising all of the land on the south side of Beacon from a line 198 feet west of Hereford to Massachusetts Avenue, with a frontage of 442 feet. The parcel originally had been intersected by Parker Street, a 60 foot wide street located on top of the Cross Dam, which ran southwest from Beacon Street at approximately a 45 degree angle, starting about 210 feet west of Hereford on the south side of Beacon.

The land east of Parker Street had been purchased from the Boston Water Power Company on June 20, 1866, by Daniel Davies, a housewright and carpenter, and the land to the west had been purchased from the company on March 1, 1872, by a real estate investment trust formed by Grenville T. W. Braman (Daniel Davies’s son-in-law), Henry D. Hyde, and Frank W. Andrews. In the late 1870s, Parker Street was abandoned and on April 30, 1878, Daniel Davies joined with Grenville Braman and his partners to acquire the land under the roadway from the Boston Water Power Company. Daniel Davies died in June of 1878, and on February 1, 1879, his heirs and Grenville Braman and his partners entered into a series of transactions to “square off” their holdings by exchanging triangular shaped lots, resulting in a north-south dividing line 265 feet west of Hereford.

Click here for an index to the deeds for 459 Beacon, and click here for further information on the land on the south side of Beacon between Hereford and Massachusetts Avenue.

On April 6, 1888, 459 Beacon was purchased from Asa Caton by Maria Louisa (White) Prouty, the wife of dry goods merchant Dwight Prouty. They previously had lived at 166 West Chester Park. They also maintained a home in Framingham.

They continued to live at 459 Beacon during the 1900-1901 winter season, but during the next season were living elsewhere and 459 Beacon was the home of Charles Wells Hubbard and his wife, Anne Laurens (Swann) Hubbard.  Their primary residence was in Weston.  He was treasurer of the Ludlow Manufacturing Company, manufacturers of jute.  By the next winter season, they had moved to the new home they had built at 79 Bay State Road.

By the 1904-1905 winter season, the Proutys were again living at 459 Beacon.  Maria Prouty died in April of 1905.  Dwight Prouty moved thereafter to Framingham.

During the 1906-1907 winter season, 459 Beacon was the home of Edward Everett Moberly, a lumber dealer, and his wife, Jennie Maude (Blair) Moberly. Their usual residence was in Chicago.

On June 25, 1909, 459 Beacon was acquired by shoe manufacturer George Edward Noyes, a widower. He previously had lived at the Copley Square Hotel (northeast corner of Huntington and Exeter).  Living with him were his sister, Elizabeth Ann (Noyes) Whipple, the widow of George Whipple, and their son, George Noyes Whipple; they previously had lived at 445 Marlborough.  Also living with them at the time of the 1910 US Census was their sister-in-law, Maria Howard (Willett) Noyes, the widow of Henry Durant Noyes.

George Noyes Whipple had been owner of a public storage warehouse until about 1905, when he became an advertising agent.  By the 1920s, he was president of The Players, a lecture association.

459 Beacon subsequently changed hands and was re-acquired by Joseph Brennan on May 16, 1929, through foreclosure of a mortgage he held on the property.

By the fall of 1929, 459 Beacon had been converted into a lodging house or dormitory, Biltmore Hall, and in September of 1929 was cited by the Building Department for insufficient egress.

On August 22, 1930, the Massachusetts Hospital Life Insurance Company foreclosed on a mortgage it held on 459 Beacon and took possession of the property.

On April 14, 1931, 459 Beacon was acquired from Massachusetts Hospital Life by Lynette (Nettie) Dawes (Moore) Baker, the widow of Harry Mudge Baker. Their adult son, Geoffrey Dawes Baker, and her mother, Florence (Dawes) Moore, the widow of Henry R. Moore, lived with her. They previously had lived in Wilton, New Hampshire, and before that, in the mid-1920s, at 333 Beacon.

Lynette Baker converted the property into a multiple dwelling, either apartments or a lodging house.

By the 1932-1933 winter season, Lynette Baker, her son, and her mother had been joined at 459 Beacon by Raymond Lester Havens and his wife, Ruth (Shoemaker) Havens. They previously had lived at 128 Chestnut. He was a piano teacher and instructor at the Boston University College of Music. They continued to live at 459 Beacon until about 1938, when they moved next door to an apartment at 457 Beacon.

By the 1933-1934 winter season, 459 Beacon also had become the home of Lawrence Bernhart Anderson, a professor of architecture at MIT (and head of MIT’s Department of Architecture from 1947 to 1965), who previously had lived in Brookline. He continued to live at 459 Beacon until about 1937, when he moved to Cambridge.

Lynette Baker, her son, and her mother continued to live at 459 Beacon until about 1937.

On June 7, 1937, the Home Owners’ Loan Corporation foreclosed on a mortgage it held on 459 Beacon and took possession of the property.

In September of 1942, the Home Owners Loan Corporation applied for (and subsequently received) permission to convert the property from a single-family dwelling into eight apartments.

On March 3, 1943, 459 Beacon was acquired from the Home Owners’ Loan Corporation by Morris Binder (Moische Kaftan), a dress manufacturer. He and his wife, Mollie (Weiner/Weinerman) Binder lived in Dorchester.

The property changed hands and on May 11, 1964, was acquired by Robert White.

On July 11, 1972, 459 Beacon was acquired from Robert White by the Armstead Corporation (Odee L. Landry, president).

On March 29, 1977, Robert White foreclosed the mortgage given by the Armstead Corporation when they purchased 459 Beacon and took possession of the property.

In December of 1988, he applied for (and subsequently received) permission to convert the property from eight apartments into ten apartments.