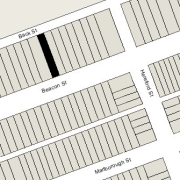 464 Beacon is located on the north side of Beacon, between Hereford and Massachusetts Avenue, with 462 Beacon to the east and 468 Beacon to the west.

464 Beacon was designed by Rotch and Tilden, architects, and built in 1891-1892 by Whidden & Co., builders and contractors, as the home of Louis Curtis and his wife, Fanny Leland (Richardson) Curtis. He is shown as the owner on the original building permit application, dated September 22, 1891, on an October 10, 1892, application to build a storage building at the rear of the property, and on the final building inspection report for the house, dated November 17, 1892.

The land for 464 Beacon was purchased by Fanny Curtis on February 6, 1891, from real estate investor Nathan Matthews. It was part of a larger parcel Nathan Matthews had purchased on August 1, 1890, from the Boston and Roxbury Mill Corporation. 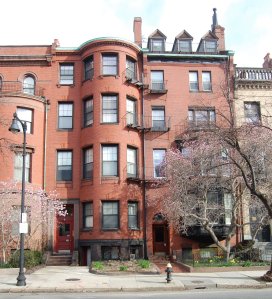 By the 1892-1893 winter season, Louis and Fanny Curtis had made 464 Beacon their home. They previously had lived at 299 Beacon. They also maintained a home in Nahant. Their raised their two sons, — Louis Curtis, Jr., and Laurence Curtis, II – at 464 Beacon.

Louis Curtis was an investment banker, the resident partner in Boston of Brown Brothers & Co.

In June of 1911, Louis Curtis applied for (and subsequently received) permission to add a story to the house at the rear, designed by architect George T. Tilden.

In May of 1919, Fanny Curtis applied for (and subsequently received) permission to add a garage at the rear, designed by architects Bellows and Aldrich.

Louis Curtis, Jr., was an investment banker with his father’s firm, Brown Brothers & Co.  In about 1921, he moved to New York City to join the firm’s office there.  In June of 1921, he married to Mary Sloan Colt.  They returned to Boston by the 1922-1923 winter season and lived at 447 Beacon.  He rejoined the Boston office of Brown Brothers & Co. and became resident partner in 1925 following his father’s retirement.

Laurence Curtis, II, was a lawyer.  He moved to Washington DC in the fall of 1921 to serve for a year as clerk to Supreme Court Justice Oliver Wendell Holmes.  He returned to Boston by the 1922-1923 winter season and resumed living at 464 Beacon with his parents.

On October 15, 1936, 464 Beacon was purchased from Fanny Curtis by Willette Marie (McKeever) Cheever, the wife of Dr. Austin Walter Cheever. They previously had lived in Brookline.

In December of 1936, Austin Cheever applied for (and subsequently received) permission to convert the property from a single-family dwelling into a dwelling and doctor’s office.

The Cheevers continued to live at 464 Beacon — and he continued to maintain his medical offices there — until about 1962.

The house was shown as vacant in the 1963 City Directory.

On November 3, 1961, 464 Beacon was purchased from Willette Cheever by Roderick William Hoag. He and his wife, Gladys (Mercer) Hoag, lived in Melrose.

On February 8, 1963, 464 Beacon was acquired from Roderick Hoag by Donald E. Devine and Robert M. Freedman.

On December 31, 1963, 464 Beacon was purchased from Donald Devine and Robert Freedman by Kenneth L. Shaw. In January of 1964, he applied for (and subsequently received) permission to convert the property from a dwelling and doctor’s office into ten apartments. He lived in one of the apartments.

On December 8, 1965, 464 Beacon was acquired from Kenneth Shaw by Abbot M. Peterson, III, and his wife, Barbara E. (Pease) Peterson. They previously had lived at 213 Beacon, which she continued to own and operate as a lodging house. They lived in one of the apartments at 464 Beacon until about 1971, when they moved to Wellesley.

On July 24, 1979, the Petersons transferred the property to Abbot Peterson, III, and Kenneth Shaw.

In November of 1981, Kenneth Shaw applied for (and subsequently received) permission to increase the number of apartments from ten to eleven.

On January 9, 1984, Abbot Peterson, III, and Kenneth Shaw transferred the property back to Abbot and Barbara Peterson.

The Petersons retained ownership of all eleven condominiums as rental units. Abbot Peterson died in December of 2012. Barbara Peterson continued to own the units and, on July 29, 2016, transferred them to herself as trustee of the Barbara P. Peterson 2016 Trust. She died in April of 2018.

On August 24, 2020, all eleven units at 464 Beacon were purchased from the Barbara P. Peterson 2016 Trust by the LDJ Development LLC (Robert Weintraub, manager).