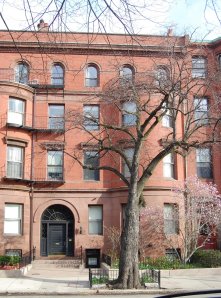 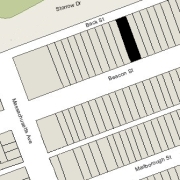 468 Beacon is located on the north side of Beacon, between Hereford and Massachusetts Avenue, with 464 Beacon to the east and 470 Beacon to the west.

The land for 468-470 Commonwealth was purchased on October 15, 1890, by James Case’s wife, Laura Lucretia (Williams) Case, from real estate investor Nathan Matthews. It was part of a larger parcel Nathan Matthews had purchased on August 1, 1890, from the Boston and Roxbury Mill Corporation. 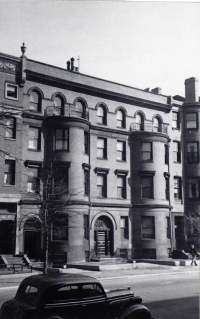 Construction of 468-470 Beacon began in July of 1891. In its July 4, 1891, report on the house, the Boston Herald commented that “eighteen months are allowed the contractors in which to finish their work. As the job might be completed, say the building fraternity, inside of a year if rushed, there is all evident intention to spare no expense or care in the building of the two new houses.”

By the 1893-1894 winter season, 468 Beacon had become James and Laura (Williams) Case’s Boston home. They previously had lived at 120 Commonwealth.  They also maintained a home, Rocklawn, in Weston, which they had built in 1889, designed by architect Ernest N. Boyden. Their unmarried daughters, Louisa Williams Case and Marian Roby Case, lived with them.

470 Beacon became the home of the Cases’ son-in-law and daughter, real estate dealer James Goldthwaite Freeman and Caroline Sumner (Case) Freeman. They previously had lived at 457 Beacon. They also maintained a home in Weston. On December 18, 1893, Laura Case transferred 470 Beacon to Caroline Freeman, but retained the bulk of the rear yard and the stables behind 470 Beacon, to be held as part of 468 Beacon.

James Case died in April of 1907. Laura Case and Louisa and Marian Case continued to live at 468 Beacon and in Weston.

In 1909, Marion Roby Case purchased land adjacent to her parents’ home in Weston and established Hillcrest Farms (renamed Hillcrest Gardens in 1920).  In 1910, she created a practical school of agriculture and farming on the property as a work/study program for local boys during their summer vacations. Hillcrest Gardens and the school continued to operate until 1942. She died in July of 1944.  In her will, she left Hillcrest Gardens to Harvard University for the use of the Arnold Arboretum.

James Freeman died in December of 1912. After his death, Caroline Freeman sold her Weston home to her sister, Louisa, and continued to live at 470 Beacon.

Louisa and Marian Case continued to live at 468 Beacon during the 1922-1923 winter season, after which they made Weston their year-round home.

On July 24, 1924, 468 Beacon was purchased from Marian Case by May Elizabeth (Bennett) Loring, the wife of Homer Loring. They previously had lived at 468 Commonwealth. In 1925, they built a second home in Ashland, Massachusetts.

Homer Loring was an investment banker and broker with major railroad and textile interests..

The Lorings continued to live at 468 Beacon until shortly before his death in June of 1939.

On October 1, 1938, 468 Beacon was acquired from May Loring by Mary E. McNally, who (according to an October 9, 1938, Boston Globe article on the transaction) took “title for the benefit of an institution that will occupy the house in the near future.”

On December 14, 1938, she transferred the property to The Lloyd Library, a collection on canon law assembled by Rt. Rev. John T. Creagh, pastor of St. Aldan’s Church in Brookline.  It remained there until mid-1949, when it was moved to the Creagh Memorial Library at St. John’s Seminary in Brighton.

On June 3, 1949, 468 Beacon Street was acquired from The Lloyd Library by the Roman Catholic Archbishop of Boston and was converted it into the offices of the Archdiocese’s Department of Education.  It continued to be located there in the 1980s, and probably later.

On March 24, 1994, 468 Beacon was acquired from the Roman Catholic Archdiocese by Tomas O. Kohn and his wife, Elaine S. Kohn,

In April of 1994, they applied for (and subsequently received) permission to convert the property into four apartments.

468 Beacon remained an apartment house, assessed as a four- to six-family dwelling, in 2017. 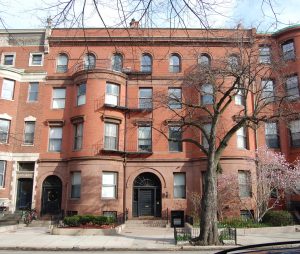