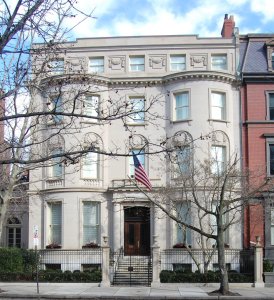 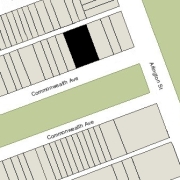 Both men purchased the land on which the houses were built from the Commonwealth of Massachusetts on May 2, 1860 (although Abbott Lawrence’s deed was not recorded until February 28, 1893, shortly before his death). The Lawrences previously had lived at 24 Summer and also maintained a home in Nahant.

Click here for an index to the deeds for 5 Commonwealth, and click here for further information about the land between the north side of Commonwealth and Alley 422, from Arlington to Berkeley.

Abbott Lawrence died in July of 1893.  Harriette Lawrence continued to live at 5 Commonwealth until her death in February of 1903. 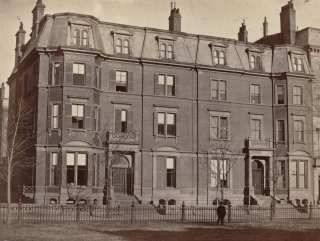 On April 15, 1903, 5 Commonwealth was purchased from Abbott Lawrence’s estate by Walter Cabot Baylies and Richard Middlecott Saltonstall, trustees under the will of George Phineas Upham. formerly of 144 Beacon. The house was purchased to be the home of Walter Baylies and his wife, Charlotte (Upham) Baylies, George Upham’s daughter. They previously had lived at 61 Commonwealth. They also maintained a home in Nahant, which Charlotte Baylies had inherited from her father, and a home, Oxbow, in Taunton. Walter Baylies’s mother, Nathalie Elizabeth (Ray) Baylies, the widow of Edmund Lincoln Baylies, also maintained a home, Kippanwoods, in Taunton.

Walter Baylies was a cotton broker and wholesale dry goods merchant, and an investor in and director of numerous electric and gas utility companies, textile mills, banks, and railroads.

After buying 5 Commonwealth, Walter and Charlotte Baylies had it completely rebuilt. The new house was designed by architect Arthur W. Rice of Peters and Rice, and included a ballroom on the formerly open lot to the west of the house.  The new house was completed in late 1903.

Bainbridge Bunting’s Houses of Boston’s Back Bay (Appendix A) indicates that the Baylies home was built in 1912, but this is not correct.

On November 14, 1903, the Boston Post published a photograph of the house, showing the new front façade and ballroom. The article commented that “from an external point of view, the Baylies mansion is nearly completed, but internally it still looks rather chaotic, and another month or so will be required to straighten things out.  Then the decorators will take it in hand and lend their best efforts toward making it one of the handsomest homes in America.”

The article described the house in some detail: 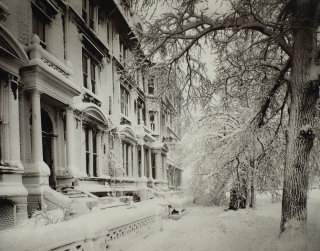 Looking east from 5 Commonwealth, taken in early February 1898; courtesy of the Boston Athenaeum (formerly a part of the Gardner Collection of Photographs, Harvard University Department of Geology)

“The handsome structure is built after the Renaissance style of Indiana limestone, with foundation of granite. Upon either side of the wide entrance hall is a large apartment with a bay window fronting the avenue. The room at the left is to be used as a dining room and that on the right is the library. The drawing rooms are situated at the back of the house and adjoin the ballroom, which juts out beyond the structure on the left. This ballroom, it is prophesied, will be the handsomest in Boston when completed. At present, by general consent, Mr. and Mrs. Bryce J. Allan have been considered to possess the most beautiful ballroom in town [at 255 Beacon], but that of the Baylieses will eclipse it.

“Wide stairways and an elevator will both be used in the Baylies mansion as a method of transit from one floor to another.  Mrs. Baylies’ sleeping room will be directly over the library. And adjoining it will be her boudoir with its lavish fitments.  Next is Mr. Baylies’ room, over the dining room. On the top floor, with plenty of light streaming through its numerous windows, is the nursery…”.

On November 22, 1903, the Boston Post published an additional article, “The Handsomest Ballroom in Boston,” which augmented the description of the interior to note that “the guest rooms, each with its adjoining bath, are on the third floor.”

On February 21, 1904, the Boston Herald’s “Social Life” column noted that “Mr. and Mrs. Walter C. Baylies moved into their new house on lower Commonwealth avenue the middle of the week.”  It appears that the interior of the ballroom may not have been completed by this point, inasmuch as the society columns for the 1904-1905 and 1905-1906 winter seasons appear to have made no reference to an event in the new space, and a December 2, 1906, “Table Gossip” note in the Boston Globe mentioned that the ballroom “was not quite ready for use last year, and some concerts were given in the spacious hall from which open out the drawing rooms and library. The room is now completed.” 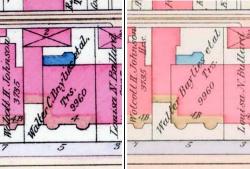 1908 and 1912 Bromley maps, showing expansion of ballroom where stable formerly was located

In 1909, the ballroom was rebuilt and expanded into the area where the stable previously was located, with the work designed by Parker, Thomas, and Rice (successors to Peters and Rice; Arthur Rice had designed the original ballroom for the Baylieses).    Architectural plans of the ballroom (dated May 1, 1909) – including elevations, floor plans, and foundation plans – are included in the City of Boston Blueprints Collection in the Boston City Archives (reference BIN A-76).

A November 11, 1973, Boston Globe article by Margaret Logan on the Baylies family and 5 Commonwealth indicates that the ballroom was completed In time for their daughter, Charlotte’s, debut in December of 1912.  This is repeated in an interview with the Baylies’ grandson, Richard Schulze, quoted in the Boston Courant on December 1, 2007 (and again on March 6, 2009), indicating that the “grand ballroom was completed in 1912 for the debutante ball” for Charlotte Baylies. Inasmuch as the ballroom annex was built as part of the 1903 reconstruction of the house, and remodeled and expanded in 1909, it appears that any work done in 1912 would have been another interior remodeling. 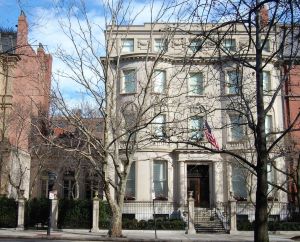 Walter Baylies died in May of 1936.  After his death, 5 Commonwealth was closed and Charlotte Baylies lived at the Ritz-Carlton Hotel during the winter and at their Taunton home in the summer.  She died in April of 1939.

On August 1, 1941, 5 Commonwealth was purchased from the Baylies Real Estate Trust by the Boston Center for Adult Education.  The BCAE continued to own and operate the building – renamed the Gamble Mansion in honor of benefactors Dr. Clarence and Sarah Merry (Bradley) Gamble – into the 21st century.

5 Commonwealth remained a single-family dwelling in 2020.