Charles Hayden purchased the land for 319-321-323 Commonwealth on July 1, 1878, from Grenville T. W. Braman, Henry D. Hyde, and Henry M. Whitney, trustees of a real estate investment trust that had purchased several parcels of land on March 1, 1872, from the Boston Water Power Company.

A July 30, 1879, article in the Boston Herald also indicates that 321-323 Commonwealth were designed by Kirby and Lewis, and describes the two houses in some detail. “No. 321 is of 24 feet front by 63 feet in depth, of three stories and a French roof and basement. It has a very fine gothic front. The other house, which is 26 by 68 feet in size, and of a corresponding height, has a front fashioned after the German style. Some novel features about this may be mentioned. There is a heavy balustrade on the second story and a second story porch — something altogether new in Boston architecture. There is also a tower on 323, the top of which is 70 feet above the street level. The fronts of both houses are of brick and Ohio stone, and the block, for both houses constitute a symmetrical block, presents a very fine appearance. The insides of the buildings are finished in hard woods, and they will cost respectively $20,000 and $23,000.”

On January 1, 1880, Asa Caton purchased 323 Commonwealth from Charles Hayden, and on the same day he sold it to wholesale hide and leather merchant Horace Billings. He and his wife, Sarah Arianna (Sears) Billings, made it their home. They previously had lived at 812 Tremont.

The Billings’s son-in-law and daughter, Charles Sprague and Ellen A. (Billings) Sprague, lived with them.  They had married in February of 1879.  Charles Sprague was an oil merchant and later president of Chase-Shawmut Company, manufacturers of “electrical specialties.”

Sarah Billings died in July of 1880 and Ellen Sprague died in December of 1880. Charles Sprague moved soon thereafter to live with his widowed father, Charles James Sprague, at 380 Marlborough. 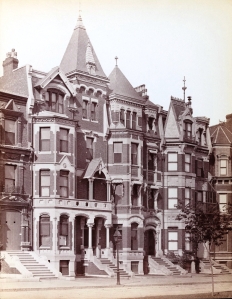 Horace Billings continued to live at 323 Commonwealth. By 1882, he had been joined by his adopted daughter, Elizabeth G. Billings. In April of 1882, they both applied for passports to travel abroad.

They continued to live at 323 Commonwealth during the 1888-1889 winter season. In April of 1889, his firm, Billings & Eaton, failed and subsequently was dissolved.  They moved soon thereafter to 53 Hereford.

On September 9, 1889, 323 Commonwealth was purchased from Elizabeth Billings by Sarah Augusta (Kenison) French, the wife of retired distiller William E. French. Their unmarried sons, Charles Edward French and George Baldwin French, who had succeeded to their father’s distillery business, lived with them. They all previously had lived at 47 Chester Square. The Frenches’ son-in-law and daughter, Frank R. Thomas and Adelaide A. (French) Read Thomas, lived at 313 Beacon, which was owned by William French.

William French died in January of 1890 and Sarah French died in August of 1895. Their home at 323 Commonwealth and the Thomases’ home at 313 Beacon were inherited by their three surviving children: Adelaide (French) Read Thomas, Charles French, and George French. Charles and George French continued to live at 323 Commonwealth and on November 3, 1903, Adelaide Thomas released her interest in that property to them and they released their interest in 313 Beacon to her.

Charles French died in August of 1904. In his will, he left his interest in 323 Commonwealth to his brother.

George French continued to live at 323 Commonwealth. By the 1904-1905 winter season, Frank and Adelaide Thomas had moved from 313 Beacon to live with him.  Frank Thomas was a salesman for a wholesale grocery company.

Frank Thomas died in September of 1927 and Adelaide Thomas died in May of 1928.  George French continued to live at 323 Commonwealth until his death in February of 1934.

On February 2, 1937, 323 Commonwealth was purchased from George French’s estate by real estate dealer Henry Joseph O’Meara, and on April 15, 1937, it was acquired from him by Virginia Lee (Major) de Roode, the wife of Albert de Roode, Jr., an insurance underwriter.

Albert and Virginia de Roode lived at 114 Bay State Road with her step-father and her mother, Dr. Clarence Field Worthen and Julia Palestine (Yates) Major Worthen. Clarence Worthen was a physician and oculist; he maintained his office at 390 Commonwealth.

In July of 1937, Julia Worthen (shown as Julia De Roja on the permit application) filed for (and subsequently received) permission to convert 323 Commonwealth from a single-family dwelling into ten apartments.

After the work was completed, the Worthens and the de Roodes moved to apartments at 323 Commonwealth.

Albert and Virginia de Roode moved soon thereafter and were living in Buckhead, Georgia, at the time of the 1940 US Census.

Clarence and Julia Worthen divorced in about 1940; he moved to 390 Commonwealth and she continued to live at 323 Commonwealth.

In 1942, Julia (Yates) Major Worthen married again, to John J. O’Carroll. After their marriage, they lived at 323 Commonwealth. By the mid-1940s, they were joined by Virginia de Roode, who had divorced from Albert de Roode. She married again in December of 1946 to Donald Hill Farrington. After their marriage, they lived in an apartment at 62 Commonwealth.

The O’Carrolls continued to live at 323 Commonwealth until about 1950.

On August 27, 1962, 323 Commonwealth was acquired from Julia O’Carroll by Lester J. Robinson. He and his wife, Edith M. (Cronshaw) Robinson, lived in Lowell. On April 9, 1964, he transferred the properties to their daughter, Louise Edith Robinson, as trustee of the Louise Robinson Realty Trust.

On May 28, 1964, 323 Commonwealth was acquired from Louise Robinson by Donald Boyko and Arthur J. Boyko, trustees of the Boyko Real Estate Trust. 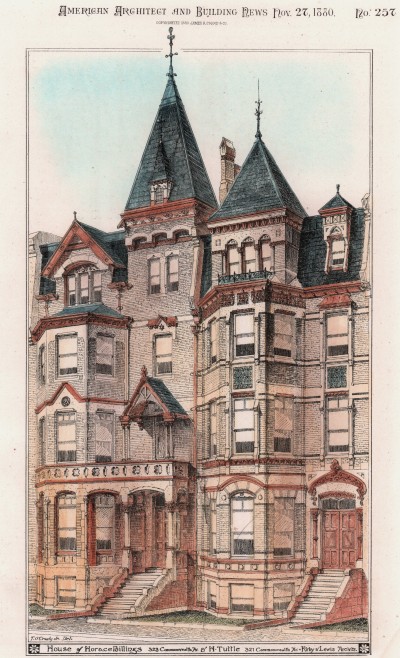