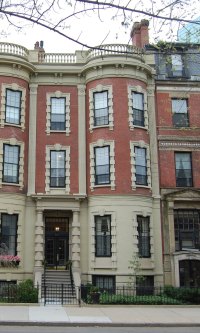 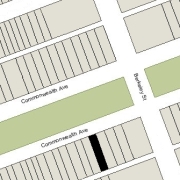 60 Commonwealth was built as the home of Judge John Phelps Putnam and his wife, Harriet (Harriette) (Day) Putnam.  They previously had lived at 97 Boylston.

Click here for an index to the deeds for 60 Commonwealth, and click here for further information about the land between the south side of Commonwealth and Alley 436, from Berkeley to Clarendon.

When 60 Commonwealth was built, the western party wall was constructed further west than appropriate and, as a result, the boundary line between 60 and 62 Commonwealth did not run through the middle of the wall. On December 1, 1871, John Phelps Putnam acquired a strip of land 2 inches wide from Henry Bigelow Williams, who was building a townhouse at 62 Commonwealth, so that the party wall would be rest equally on both lots.

Harriet Putnam’s nephew, Robert Day Andrews, also lived with them from about 1875. He was a student at MIT and then draftsman in the offices of Henry Hobson Richardson. He moved to Albany, New York, in the late 1870s, but was living with them again by the early 1880s.

John Phelps Putnam died in January of 1882, and Harriet Putnam and their unmarried daughter, Ellen Day Putnam, moved to the the Hotel Vendome. By the 1885-1886 season, they were living at 355 Marlborough.  Robert Andrews moved to 6 Beacon, where he also maintained his architectural offices with Herbert Jaques in their newly-formed partnership, Andrews and Jaques.

By the 1882-1883 winter season, 60 Commonwealth been leased from Harriet Putnam by William Gurdon Saltonstall and his wife, Josephine Rose (Lee) Saltonstall.  They previously had lived in Salem.  Formerly an East India merchant, he was treasurer of several cotton mills.  By the 1884-1885 winter season, the Saltonstalls had moved to their newly-built home at 30 Fairfield.

On November 13, 1884, 60 Commonwealth was acquired from Harriet Putnam by Annie (Grant) Allen, the wife of hardware dealer George Allen. They previously had lived in Newton. They continued to live at 60 Commonwealth during the 1885-1886 season, but then again made their home in Newton.

On November 5, 1886, 60 Commonwealth was purchased from Annie Allen by cordage merchant William Bull Sewall. He and his wife, Lena French (Ingalls) Sewall, made it their home. They previously had lived at 26 Brimmer. They also maintained a home in Beverly Farms.

William Gilman Sewall graduated from Harvard in 1897, traveled abroad, briefly was treasurer of a sawmill in Texas, and then became a farmer and planter in Kenya.

Lena Sewall continued to maintain 60 Commonwealth as her Boston residence but traveled abroad extensively, including living in Europe from 1901 until late 1903, and then traveling around the world in 1905-1906.

Rufus and Harold Sewall lived with their mother at 60 Commonwealth. They were in partnership as real estate dealers until mid-1901, when Harold Sewall traveled abroad.  He married in Tokyo in April of 1903 to Virginia Simms Evans. They settled in Puerto Rico where he operated a sugar plantation.

Rufus Sewall became a stockbroker and married in June of 1903 to Juanita Ceballos Hewitt. They subsequently lived in an apartment at 755 Boylston and later at 10 Gloucester.

Lena Sewall returned from her round-the-world trip in 1906 but then left again in October of that year for another extended stay abroad.

60 Commonwealth was leased for the 1906-1907 winter season by wholesale jeweler David Crowell Percival, Jr., and his wife, Jennie F. (Bessie) Percival.  They previously had lived at 486 Beacon. They also maintained a home, Greycourt, on Marblehead Neck and in February of 1907 acquired a stock farm in Sudbury near the Wayside Inn.

The Percivals were joined at 60 Commonwealth by their son and daughter-in-law, Lawrence French Percival and Evelyn Harris (Joyce) Percival, and by their son-in-law and daughter, Herman Parker and Lillian H. (Percival) Parker. Lawrence Percival was a jeweler with his father’s wholesale jewelry firm, D. C. Percival & Co. Herman Parker was a retail clothier in the firm of Macullar, Parker & Co., founded by his father, Charles Wallingford Parker.  Both couples had lived with David and Jennie Percival at 486 Beacon. The Percivals’ other son and daughter-in-law, David Crowell Percival, III, and Harriette E. (Williamson) Percival, lived at 306 Commonwealth; he was treasurer of D. C. Percival & Co.

Lawrence and Evelyn Percival moved to 9 Brimmer for the 1907-1908 winter season and then to Brookline. 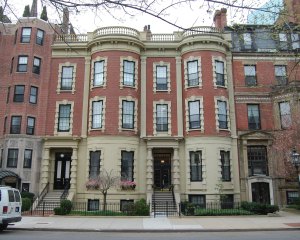 David Percival died in January of 1913.  Jennie Percival and the Parkers continued to live at 60 Commonwealth.  By the 1915-1916 winter season, they were once again joined by Lawrence and Evelyn Percival.

On March 14, 1935, 60 Commonwealth was acquired by William Bradford Sprout, Jr., of Hingham. In January of 1936, he applied for (and subsequently received) permission to convert the house from a single-family home into a six-family dwelling. In March of 1936, he amended his plans to increase the occupancy to eight apartments.

On May 11, 1936, 60 Commonwealth was acquired from William Bradford Sprout, Jr., by real estate dealer Wallace Raymond Marden. He and his wife, Marjorie Lewis (Maclary) Marden, lived in Hingham and he maintained his office at 501 Beacon. On October 23, 1940, he transferred the property to himself as trustee of the Investment Realty Trust, and on August 30, 1943, he transferred it to his sister-in-law, Helen Elizabeth (Maclary) Baader, the widow of Albert Stanley Baader, as trustee of the Holden Realty Trust.

The property changed hands and on October 16, 1945, was acquired by Mutual Associates, Inc., of which Irving W. Boyer was the president and Samuel M. Lewis was the treasurer.  Irving Boyer and Samuel Lewis also owned 56 Commonwealth, which they transferred to Mutual Associates in November of 1945.

Irving Boyer (Israel Levine) and his wife, Nellie (Raphael) Boyer, owned The Sheraton Shop, a furniture store at 717 Boylston. They lived in Newton. Samuel M. Lewis was a manufacturer; he and his wife, Sally E. (Kramer) Lewis, lived in Chestnut Hill.

On June 1, 1959, Mutual Associates transferred 56 Commonwealth and 60 Commonwealth to Irving Boyer and Samuel Lewis, and on the same day it was acquired by Southeast Management Corporation.