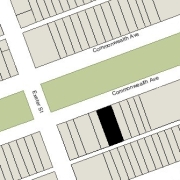 180 Commonwealth was designed by George Nelson Jacobs, architect, and built in 1925 as an eight-story, 32-unit apartment house.

180 Commonwealth replaced two townhouses at 180 and 182 Commonwealth that were purchased in 1925 by Jacob Marks, president of the M & S Petticoat Company. He and his wife, Eva (Finer) Marks, lived at 106 Queensberry.

Click here for an index to the deeds for 180 Commonwealth, including its predecessor buildings, and click here for further information about the land between the south side of Commonwealth and Alley 434, from Dartmouth to Exeter.

Jacob Marks appears to have developed 180 Commonwealth in association with real estate dealer Louis Samuel Koufman, who is shown as the owner on the original building permit application for the new building, dated January 15, 1925. In 1927, Jacob Marks and Louis Koufman similarly collaborated on an apartment building at 12 Commonwealth, also designed by George Nelson Jacobs.

180 Commonwealth was completed by the 1925-1926 winter season. Among the first residents were:

In February of 1931, Jacob Marks declared bankruptcy, and on January 4, 1932, the New York Life Insurance Company foreclosed on its mortgage and took possession of the property.

On June 29, 1974, 180 Commonwealth was purchased from The Croyden, Inc., by Harvey Brockway Moore, a real estate broker, and his wife, Elizabeth Jackson (Blakney) Moore. They lived in an apartment at 280 Beacon.

On the same day, the Moores converted the property into 34 condominium units and one superintendent’s apartment, the 180 Commonwealth Avenue Condominium.

180 Commonwealth was designed by architect Samuel D. Kelley and built in 1883 by William Seavey Rand for speculative sale.  He is shown as the owner on the original building permit application, dated April 30, 1883.

On May 28, 1884, 180 Commonwealth was purchased from William Rand by Elizabeth Potter (Jack) Latta, the wife of James Melyne Latta. 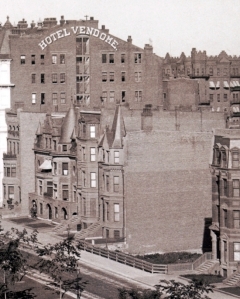 James Latta was a real estate and railroad investor. Born in Indiana, he and his wife had lived in Washington DC in the 1860s and 1870s, and were living on a farm in Elkhart, Indiana, at the time of the 1880 US Census. At the time they purchased 180 Commonwealth, they were living in Goshen, Indiana, which remained their primary residence. It appears that they purchased a Boston home when their son, William Jack Latta, attended Harvard (he graduated with the Class of 1889).

On September 26, 1889, 180 Commonwealth was purchased from Elizabeth Latta by Lydia Frances (Waterman) Evans, the wife of Irving Alonzo Evans. They previously had lived at the Hotel Vendome.

Irving Evans was a stock and bond broker.  He committed suicide on October 16, 1891, despondent over his unsuccessful speculations.   Lydia Evans continued to live at 180 Commonwealth during the 1891-1892 winter season, but moved thereafter.

On October 15, 1892, 180 Commonwealth was acquired from Charles Evans by Sarah Elizabeth (Wendell) Marcy, the wife of Dr. Henry Orlando Marcy. They previously had lived at 336 Boylston. He was a physician and also maintained his medical offices at 180 Commonwealth.

Their younger son, Henry Marcy, Jr., also a physician and surgeon, lived with them.  He maintained his medical office both at 180 Commonwealth and at 665 Boylston.  He married in May of 1909 to Eleanor Hunnewell Nichols.  After their marriage, they lived in Newton; he continued to maintain his office at 180 Commonwealth until about 1912.

On September 22, 1924, 180 Commonwealth was purchased from Henry Marcy’s estate by Jacob Marks. It was razed soon thereafter. 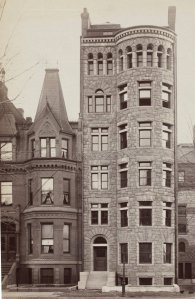 Portion of 182 Commonwealth, shown to the east of 184 Commonwealth (ca. 1889); courtesy of the Print Department, Boston Public Library

182 Commonwealth was designed by architect William Pitt Wentworth and built in 1879-1880 by Standish & Woodbury, masons, and Creesy & Noyes, carpenters, as the home of marble and granite manufacturer Oliver M. Wentworth and his wife, Melvina (Gill) Wentworth.  They previously had lived at 24 Hancock.  He is shown as the owner of 182 Commonwealth on the original building permit application, dated October 6, 1879, and on the final building inspection report, dated November 5, 1880.  William Pitt Wentworth and Oliver M. Wentworth do not appear to have been closely related.

Melvina Wentworth died in June of 1919.  Oliver Wentworth continued to live at 182 Commonwealth.  By 1920, he had been joined by Robert Hiram Grace, his private secretary.  Robert Grace had been married to Melvina Emogene Gill, the niece of Oliver Wentworth’s wife, Melvina (Melvina (Gill) Grace was the daughter of Mortimer D. Gill; she died in September of 1913).  Also living with them was Ada R. (Dunn) Lowe, the widow of Charles Edwin Lowe.

Oliver Wentworth died in March of 1922. In his will, he left bequests to various educational institutions, but specified that, if any of them supported or maintained a football team, the legacy was revoked.

After Oliver Wentworth’s death, 182 Commonwealth became a multiple dwelling, either apartments or a lodging house.

By the 1922-1923 winter season, it was the home of the home of Virginia (Dailey) Harrison, the widow of Dr. Henry H. Harrison. Henry Harrison had been a retired dentist engaged in the cranberry packing business. He had died in August of 1922, a suicide. She continued to live at 182 Commonwealth through the 1924-1925 season, but moved thereafter to 270 Bay State Road.

In 1923, 182 Commonwealth also was the home of Rev. William Russell Scarritt, his wife, Elizabeth (Mariner) Scarritt, and their unmarried son, William Russell Scarritt, Jr., a lawyer, and daughter, Gwendolen Scarritt. They previously had lived at 319 Commonwealth. William Scarritt was an Episcopal clergyman, having served as co-rector of the Church of the Advent until his retirement in 1919. The Scarritts had moved by 1924 and by 1925, they were living at 17 Pinckney.

On June 11, 1923, 182 Commonwealth was purchased from Oliver Wentworth’s estate by real estate dealer Najeeb N. Meshaka. He lived at 182 Commonwealth in 1923 and 1924, but moved thereafter to Brookline.