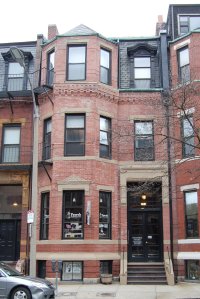 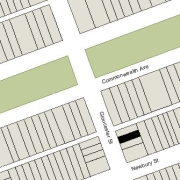 31 Gloucester was designed by architect Samuel D. Kelley and built in 1882-1883 by Samuel Tarbell Ames, builder, for Charles Anthony Morss, a wire and cable manufacturer. It was one of four contiguous houses (29-31-33 Gloucester and 279 Newbury) built for Charles Morss for speculative sale. He and his wife, Mary Elizabeth (Wells) Morss , lived at 323 Marlborough.

Charles Morss is shown as the owner on the original building permit applications for all four houses, dated April 18, 1882. He purchased the land for the houses on April 1, 1882, from Susan (Susie) A. (Davies) Braman, the wife of Grenville Temple Winthrop Braman, former treasurer of the Boston Water Power Company. The land had changed hands several times and was part of a parcel previously owned by Nathan Matthews, part of an even larger tract he had purchased on January 2, 1871, from David Sears, Jr., Frederick R. Sears, and Knyvet Sears.

Click here for an index to the deeds for 31 Gloucester.

When the completed houses at 29-31-33 Gloucester were sold by Charles Morss, he included a 3 foot 6 inch easement at the rear of 29-31 Gloucester to provide access to the alley for all three houses.

On November 8, 1882, 31 Gloucester was purchased from Charles Morss by Charles Barker Taylor. He and his wife, Fannie Gertrude (Bond) Taylor, made it their home. They previously had lived in Cambridge.

The Taylors spent the winter season at 31 Gloucester or at their home in Cambridge, and maintained a summer home on Smith’s Point in Manchester.  He was described in an August 19, 1902, Boston Globe article as having an “independent income” and “not engaged in any business.”

During the 1884-1885 winter season, the Taylors were living in Cambridge and 31 Gloucester was the home of John Marshall Ward, treasurer of the Boston Theatre, and his wife, Elizabeth (Tolman) Ward.  Living with them were his mother, Amanda (Atherton) Ward, the widow of Charles Trowbridge Ward, and his sister, Catherine Dexter (Ward) Perry, the former wife of William Cabot Gorham Perry. They continued to live at 31 Gloucester during the 1886-1887 season, but moved thereafter to 361 Beacon.

The Taylors resumed living at 31 Gloucester, but were again living elsewhere during the 1894-1895 winter season, and 31 Gloucester was the home of John Vaughn Apthorp, a dealer in real estate and mortgages, and his wife, Mary Sarah (Sargent) Thomas Apthorp.  They had lived at 352 Marlborough during the previous season. They also maintained a home in Cohasset. By the 1895-1896 season, they had moved to an apartment at 186 Commonwealth.

By the 1895-1896 winter season, the Taylors were living at 31 Gloucester again.  During the next season, they were joined there by John Chase Howe and his daughter, Marie Howe.  John Chase Howe was a dealer in dye stuffs, paint, and isinglass.  He was a widower.  In July of 1897, He married again, to Mabel Allison Yates.  The same month, Marie Howe married Mabel Yates’s brother, Walter Yates, a ship chandler. 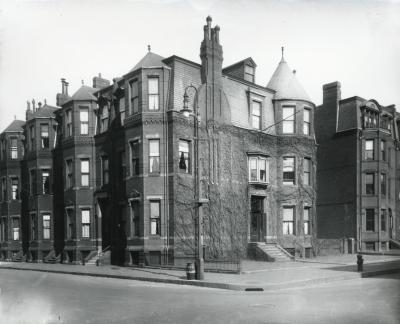 They continued to live there in 1906, but during the 1906-1907 winter season were again living elsewhere and 31 Gloucester was the home of Ralph Blake Williams, a real estate trustee, and his wife, Susan (Jackson) Williams.  They had married in September of 1906 and 31 Gloucester probably was their first home together.  Prior to their marriage, he had lived at 424 Beacon with his mother, Alice (Weld) Williams, the widow of Thomas Blake Williams.  They continued to live at 31 Gloucester during the 1908-1909 season, after which they moved to live with his mother at 424 Beacon.

By the 1909-1910 winter season, the Taylors were again living at 31 Gloucester.  They continued to live there during the 1910-1911 season, after which they made their home in Manchester.

By the 1911-1912 winter season, 31 Gloucester was the home of Howard Chubbock Turner and his wife, Helen (Ross) Turner.  They previously had lived in an apartment at 386 Commonwealth. He was an executive of a lamp company and later would become trustee of his father’s estate.  They continued to live there during the 1922-1923 season, but moved thereafter to 288 Marlborough.

On April 9, 1923, 31 Gloucester was purchased from Charles Taylor by Andrew Francis Carter, He and his wife, Ethel (Robinson) Garcia Carter, made it their home. They previously had lived at 35 West Cedar.

Andrew Carter He was an oil industry executive and in the 1950s organized the Commonwealth Oil Refining Company in Puerto Rico. A graduate of the US Naval Academy, he served in World War I and World War II, with the rank of Rear Admiral in World War II.

Andrew and Ethel Carter continued to live at 31 Gloucester in 1925, but moved thereafter to Chestnut Hill.

On November 5, 1925, 31 Gloucester was acquired by Miss Annabel Park, who lived there with her mother, Gertrude May (Hood) Park, the widow of John Francis Park. They previously had lived at 1 Exeter.  They also maintained a home at Buzzard’s Bay.

Gertrude Park’s granddaughter, Florence Jones, also lived with them.  She was the daughter of Ralph Augustus Jones and Florence C. (Park) Jones.  She had been born in August of 1925 and her mother had died in childbirth or soon thereafter.  It appears that Florence Jones was raised by her grandmother and her aunt.

In February of 1930, Annabel Park married Francis Wright Fabyan, a cotton and dry goods merchant.  He was a widower and had lived at 146 Commonwealth until the death of his wife, Edith (Edwith) (Westcott) Fabyan, in December of 1928.  He also maintained a home in Buzzard’s Bay.

The Fabyans, Gertrude Park, and probably Florence Jones continued to live at 31 Gloucester until about 1935. They also continued to maintain a home in Buzzard’s Bay, which had become their primary residence by 1935. Gertrude Park died in January of 1937 and Francis Fabyan died in September of 1937.  Annabel (Park) Fabyan married again in 1939 to Dr. Chauncey Nye Lewis, a dentist and oral surgeon. After their marriage, they lived at 376 Marlborough.  Florence Jones lived with them.

On December 8, 1937, 31 Gloucester was purchased from Annabel (Park) Fabyan by Phyllis A. Goodman, an employee of the Commercial Finance Service who acted on behalf of its president, William Karmazine, in various real estate transactions.

31 Gloucester continued to be shown as vacant in the 1937-1939 City Directories.

On July 6, 1939, 31 Gloucester was acquired from Phyllis Goodman by Harry Bernard Lacey. He and his wife, Helen Verdine (Koppler) Lacey, made it their home. Their son and daughter-in-law, Harry Koppler Lacey and Gladys (Paynter) Lacey, lived with them. Harry B. and Harry K. Lacey were interior decorators and they maintained their studio in the house.  They previously had lived and maintained their studio at 117 Newbury. 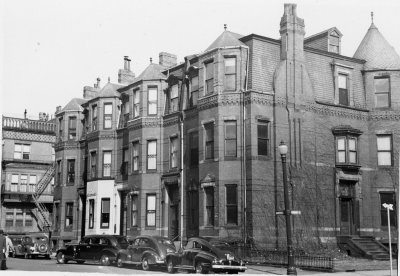 The Laceys used “de Lacey” or “de Lacy” as their professional name, and are listed under that name in many of the Boston City Directories.

Harry B. Lacey died in October of 1940.  Helen Lacey and Harry and Gladys Lacey continued to live (and he continued to maintain his interior decorator’s studio) at 31 Gloucester.

Gladys Lacey either died or they were divorced in the early 1940s, and in December of 1944 Harry Lacey married again, to Elizabeth S. Chapman.  They lived at 31 Gloucester until late 1946.  Helen Lacey continued to live with them.

On July 9, 1946, the Boston Globe reported that Harry K. Lacey was the unwitting acquirer a painting, “Descent from the Cross” by Rubens, which had disappeared from Harvard where it was on loan from Jean Bullitt Darlington.  He had purchased the painting from the former manager of the Boston Art Club in 1942, and indicated that it was unsigned and that he had no idea of its value.  It had hung for six years over his fireplace at 31 Gloucester until he learned that Mrs. Darlington had filed suit against Harvard.  At that point, he notified Harvard and they took possession of the painting.

On May 1, 1946, 31 Gloucester was acquired from Helen Lacey and Harry K. Lacey by the trustees of a trust established under the will of Joseph Brown Thomas. It became the home of his grandson, Joseph Brown Thomas, III. He previously had lived in New York City, and also maintained a home, Fortune Rock, in Mt. Desert, Maine. He appears to have been living in Boston separately from his wife, Clara (Fargo) Thomas, a noted muralist and stage designer.

Joseph B. Thomas, III, was the former owner of the Valley Farm Kennels in Simsbury, Connecticut, and was an expert on the breeding of Russian wolfhounds (Borzoi).

By 1948, he had been joined at 31 Gloucester by Vera Consuelo (Cloos) Ryan Panteleieff, the wife of opera singer and vocal teacher Maxim (Max) Petrovitch Panteleieff (Panteleeff/Pantelieff). She was an opera and concert singer who performed regularly with her husband, with whom she had organized the Russian Art Grand Opera Company in 1929. They were living apart, but continued to perform together and, on April 22, 1949, gave a joint recital at Jordan Hall in Boston. Consuelo Cloos also was a poet and impressionist artist; in 1976, she was invited by Salvador Dali to exhibit her work at his gallery in Spain.

The trust created under Joseph Brown Thomas’s will (which had purchased 31 Gloucester) was established for the benefit of his two sons, Joseph Brown Thomas, II, and Washington Butcher Thomas. It provided that, twenty years after the death of whichever son died last, the trust was to be terminated and the principal distributed to their heirs. Joseph Brown Thomas, II, died in August of 1909 and Washington B. Thomas died in May of 1929. The trust was terminated in May of 1949, and on June 3, 1949, the trustees transferred 31 Gloucester to Joseph B. Thomas, III. He continued to live there until about 1950.

On March 31, 1950, Joseph Thomas transferred 31 Gloucester to Flora E. Skinner of Wakefield, a secretary with the law firm of Hutchins and Wheeler, and on April 14, 1950, she transferred the property back to him to be his property during his lifetime and, upon his death, to become the property of Vera Consuelo Cloos, if living, and if not, to become the property of his two children, Joseph Brown Thomas, Jr., and Clara Jane Diana (Thomas) Greenough, the wife of journalist Peter Bulkeley Greenough.

On February 16, 1951, Joseph Thomas transferred 31 Gloucester to Vera Consuela Cloos. In March of 1951, she was divorced from Maxim Panteleieff.

On June 13, 1951, 31 Gloucester was purchased from Vera Consuela Cloos by David Bugbee Coburn and his wife, Margaret M. (Quinn) Coburn. They previously had lived at 21 Newcastle Road. He was an engraver and she was a teacher.

In May of 1951, prior to taking title to the property, they applied for permission to convert 31 Gloucester from a single-family dwelling into a dwelling and business so that they could locate David Coburn’s engraving company in a portion of the basement. The application was denied and he did not appeal the denial.

In August of 1968, David and Margaret Coburn applied for (and subsequently received) permission to repair fire damage to the upper story and roof.

On October 18, 1978, 31 Gloucester was acquired from Thomas F. Quinn, guardian of the property of Margaret Coburn, by James C. Lawless and Christina B. Lawless, trustees of the Downey Realty Trust. They also owned 29 Gloucester, which they had purchased in April of 1976.

In December of 1978, James Lawless applied for (and subsequently received) permission to convert 31 Gloucester from a single-family dwelling into eight apartments.

On June 17, 2002, they transferred the property to themselves trustees of the 31 Gloucester Street Real Estate Trust.

On October 1, 2007, 31 Gloucester was purchased from the Lawlesses by Kristal Property LLC (Barbara L. Rubin, manager of record). In October of 2007, it filed for (and subsequently received) permission to convert the property from eight apartments into three apartments, three retail units, and two offices.

31 Gloucester remained a mixed residential and commercial building in 2017.