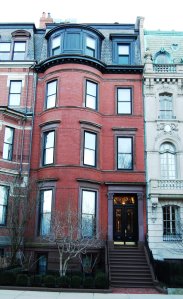 126 Commonwealth was designed by Emerson and Fehmer, architects, and built in 1871-1872 by I. & H. M. Harmon, masons and builders, as the home of attorney Elias Gilbert Merwin and his wife, Anne (Annie) Mary (Childs) Merwin.

Elias Merwin purchased the land for the house from the Commonwealth of Massachusetts on September 29, 1871.

Click here for an index to the deeds for 126 Commonwealth, and click here for further information about the land between the south side of Commonwealth and Alley 435, from Clarendon to Dartmouth.

In October of 1871, I. &. H. M. Harmon filed a Notice of Intention to Build on behalf of Elias Merwin with the Board of Street Commissioners (reported in the Boston Herald on October 24, 1871). By 1873, Elias and Anne (Childs) Merwin had made 126 Commonwealth their home. They previously had lived at 175 Beacon.

Kate Merwin (who was called Sarah L. Merwin in her Pittsfield birth record) married in December of 1874 to William Wurts White, a coal dealer from Philadelphia. After their marriage, they lived in Providence.

Henry Childs Merwin married in April of 1884 to Anne Amory Andrews. After their marriage, they lived at 6 Otis Place and then in Concord, Massachusetts. They later also maintained a residence in Weld, Maine. Henry C. Merwin was an attorney, judge, author, and lecturer at Boston University Law School. In 1902, he joined with Robert Ashton Lawrence and others in forming the Boston Work Horse Parade Association, serving as secretary and then president. In 1913, it was reorganized as the Boston Work Horse Relief Association and established a free hospital for horses on Northampton Street named in honor of Ashton Lawrence. Henry Merwin served as president of the Association until his death in January of 1929. A stone bench in his memory is located on the south side of the Commonwealth Avenue Mall, between Arlington and Berkeley Streets.

Arthur Gilbert Merwin attended Harvard with the Class of 1884. In January of 1882, he married Catharine (Katherine) R. Wildes. The marriage occurred without the consent of either family and the couple may soon have separated. By 1884, he was living in Providence, working for his brother-in-law, William W. White. In 1885, he moved to Chicago and in September of 1885 he and Catherine were divorced. In April of 1888 he married in Chicago to Emma T. Currier. They subsequently lived in St. Louis but had returned to Boston by 1897. She died in December of 1915, and he married again in December of 1916 to Anne Rutherford. From about 1913 until his death in February of 1924, he was general agent for the Boston Working Horse Relief Association.

Annie C. Merwin continued to live with her parents at 126 Commonwealth.

Elias Merwin died in March of 1891, and Annie (Childs) Merwin died in December of 1891. Annie C. Merwin moved thereafter. By 1910, she was living in Washington DC, where she died in November of 1931. She never married.

On September 22, 1892, 126 Commonwealth was purchased from Elias Merwin’s estate by Dr. Henry Cutler Baldwin, a neurologist. He previously had lived at 172 Commonwealth.

In September of 1894, he married May Hamelin Widney; after their marriage, they lived at 126 Commonwealth.

The lodger who stayed the longest with the Baldwins was Rev. William Herbert Dewart. He had been named assistant rector at Trinity Church in April of 1893 and was living at 126 Commonwealth by the 1893-1894 winter season.  In October of 1899, he married Elizabeth Haven Russell and moved to 277 Clarendon.  After their marriage, they also maintained a home in Milton.

Among the other lodgers at 126 Commonwealth during the 1893-1894 winter season were Elias R. Hunnewell and J. Murray Quinby,  Elias Hunnewell was the proprietor of Doe, Hunnewell & Co., furniture dealers, located at 4 Arlington; J. Murray Quinby was a salesman with the firm.  They both previously had lived at the Copley Square Hotel.  By the next season, they had moved to an apartment at the Hotel Royal at 295 Beacon.

Dr. Baldwin also provided office space at 126 Commonwealth to other physicians, including Dr. Henry H. Haskell (from 1896 to 1900), who lived in Auburndale (and subsequently moved to 34 Commonwealth), and Dr. Frederick E. Cheney (from 1904 to 1915), who lived in Concord.

Henry Baldwin died in February of 1915 and May Baldwin moved to Newton.

On September 10, 1915, 126 Commonwealth was acquired from May Baldwin by Frank E. Peabody, an investment banker who lived at 120 Commonwealth.

Two months later, on November 27, 1915, 126 Commonwealth was purchased from Frank Peabody by Ellen White (Joy) Gray, the wife of banker and securities broker Francis Gray. They previously had lived in Milton.

During the 1925-1926 winter season, the Grays were joined at 126 Commonwealth by Francis Gray’s sister, Sarah Frances (Gray) Silsbee, the widow of George Saltonstall Silsbee. She previously had lived at 88 Beacon. She subsequently traveled abroad and then made her home in Beverly.

On February 25, 1943, 126 Commonwealth was acquired from Ellen Gray by Shirley Clifford Speed, a real estate dealer who converted many Back Bay houses into lodging houses and apartments.  In May of 1943, he applied for (and subsequently received) permission to convert the property from single-family dwelling to a lodging house.

On June 23, 1943, 126 Commonwealth was acquired from S. Clifford Speed by Elmina (Thompson) Milne, the wife of Robert B. Milne. They lived in Brookline.

On September 28, 1943, Elmina Milne transferred the property to herself, her husband, and their two sons, Malcolm Bruce Baird Milne and Robert S. Milne. Robert Milne moved to 126 Commonwealth, which continued to be operated as a lodging house.

Elmina Milne died in January of 1946, and on June 1, 1946, Robert B. Milne transferred his interest in 126 Commonwealth to their two sons. Robert S. Milne continued to live at 126 Commonwealth and Malcolm B. B. Milne lived in West Springfield.

October 30, 1946, 126 Commonwealth was purchased from Robert and Malcolm Milne by Archie Wells Legro, an engineer, who lived there and continued to operate it as a lodging house. He previously had lived at 92 Pinckney.

On January 8, 1971, 126 Commonwealth was purchased from Archie Legro by Ralph David Fraser, Gerald G. Hitchcock, and Charles David Libby, trustees of the Trinity Trust. It remained a lodging house.

In January of 1987, Lower Back Bay Associates applied for (and subsequently received) permission to convert the property from a lodging house into seven apartments, including adding a fifth floor penthouse.

On May 26, 1987, 126 Commonwealth was purchased from Lower Back Bay Associates by Edgard Puente and John Moran, trustees of the 126 Commonwealth Avenue Realty Trust. In June of 1987, they applied for (and subsequently received) permission to reduce the number of units from seven to five.