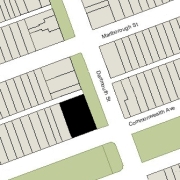 306 Dartmouth was designed by Peabody and Stearns, architects, and built in 1871-1872 for Stephen Van Rensselaer Thayer.

Stephen V. R. Thayer had graduated from Harvard in 1870 and married in November of 1870 to Alice Robeson.  On January 20, 1871, he purchased the land on which 306 Dartmouth would be built from the Commonwealth of Massachusetts.  The original lot had a 50 foot frontage on Dartmouth and an 88 foot frontage on Commonwealth.

In May of 1871, Stephen V. R. Thayer filed a Notice of Intention to Build with the Board of Street Commissioners (reported in the Boston Herald on May 23, 1871), and in June of 1871, he contracted with Peabody and Stearns to design his new home.

Click here for an index to the deeds for 306 Dartmouth, and click here for further information about the land between the north side of Commonwealth and Alley 425, from Dartmouth to Exeter. 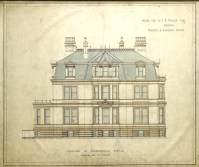 Plans for the original house are included in the Peabody and Stearns Collection in the Boston Public Library’s Arts Department (reference PS/MA 154).  At the right are scans of the Dartmouth and Commonwealth façades, provided courtesy of Hamady Architects LLC, and First Boston Realty.

Click here to view all of the elevations and floor plans of the original building.

An August 24, 1871, Boston Traveller article on work underway by Peabody and Stearns commented that an “elegant residence is half way up for Mr. S. V. R. Thayer, on Commonwealth avenue and Dartmouth street. It is of brick and brown stone, 50×60 feet, with a broad open space on all sides. It will be very expensive, and though simple will be ample and generous in its finish.”

Stephen V. R. Thayer died in October of 1871 at the age of 24. At the time of his death, the Thayers were living at 6 Commonwealth.  After his death, Alice Thayer and their infant son, Stephen, moved to 191 Beacon.

306 Dartmouth was still under construction at the time of Stephen V. R. Thayer’s death, and on May 29, 1872, his estate sold the property at public auction to James Henry Blake. Two days later, James Blake purchased from the Commonwealth the vacant lot to the north, between 306 Dartmouth and the alley, with a frontage of 74.5 feet on Dartmouth. The lot remained vacant inasmuch as the house – already under construction — was designed for the original lot with a 50 foot frontage on Dartmouth.

James H. Blake was a banker and later would serve as trustee of the estate of Stephen V. R. Thayer’s father, Nathaniel Thayer, who died in March of 1883. James Blake and his wife, Alice (Spring) Blake, lived at 193 Beacon.

By 1873, 306 Dartmouth was the home of lumber merchant and real estate investor Charles Whitney and his wife, Sarah Kimball (Bradley) Whitney. They previously had lived in Lowell, where they continued to maintain a second home. On May 1, 1874, he purchased 306 Dartmouth (including the vacant lot to the north) from James Blake.

The Whitneys continued to live at 306 Dartmouth in 1880.  In about 1881, after the Hotel Vendome expansion was completed, the Whitneys moved to a suite of apartments at the hotel.

On September 9, 1880, 306 Dartmouth was purchased from Charles Whitney by Rebecca Caroline (Blair) Ames, the wife of Frederick Lothrop Ames.

Frederick Lothrop Ames was an investor in railroads and real estate. His grandfather, Oliver Ames, founded the Ames pick and shovel business in North Easton, and his father, Oliver Ames, Jr., and uncle, Oakes Ames, continued and expanded that business and also were instrumental in the development of the Union Pacific Railroad and other railroads.

The Ameses had 306 Dartmouth significantly remodeled and expanded. They also maintained a home in North Easton, which was their primary residence until the remodeling was completed. At the same time as they were remodeling 306 Dartmouth, they also built a stable at 344 Newbury.

The remodeling of 306 Dartmouth was designed by architect John Sturgis of Sturgis and Brigham and included construction of a new wing on the previously vacant land to the north of the original house.  The new wing included a porte-cochere and side entrance by which guests could enter, take an elevator to the second floor, and then descend a grand staircase to the first floor living hall, eighteen by sixty-three feet with an eighteen-foot ceiling.  The staircase, rising through three stories, had a domed ceiling with murals by Benjamin Constant and stained glass by John La Farge.  Bainbridge Bunting describes the remodeling in detail in his Houses of Boston’s Back Bay, which also includes photographs of the interior. 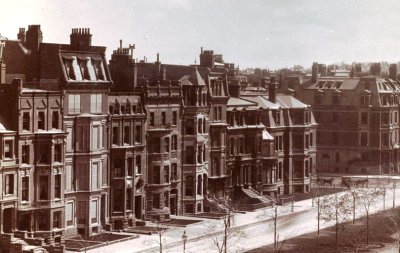 On March 29, 1881, the Boston Evening Transcript commented that “one of the most important improvements in Commonwealth avenue is that to be made by Mr. Fred L. Ames, by which his house will be enlarged to double its present size, the cost of the alteration being about $100,000.  Among the special features will be a porte-cochère, or driveway, running through the house, so that carriages can receive their loads under cover. The house will contain a hall, 80×17 feet, a dancing room, 25×38 feet, and a conservatory, 36×19 feet, and , when finished, will be one of the finest in the city.”

Two years later, on March 25, 1883, the “Table Gossip” column in the Boston Globe reported that “Mr. and Mrs. Frederick Ames have moved into their palatial new residence” and Globe’s “The Man About Town” column on the same day commented that “The friends of Fred L. Ames are admiring his new house on Commonwealth avenue, which is said to be ‘the finest house in Boston.’  It has certainly been remodelled regardless of expense.  He has several windows in the hall which cost $2000 apiece.  This gives a very good idea of the cost of the alterations and furnishings.”

On June 24, 1887, the Boston Post reported that “Mr. Fred L. Ames is to light his Commonwealth avenue residence with incandescent electric globes, the power being furnished by storage batteries. When completed the plant will be the largest in any private residence in the country.”

On January 11, 1888, the Ameses’ butler, Dennis Mulhern, shot Bridget (called Mary) Maguire, a waitress on the staff, in what the Boston Globe called a “Lovers’ Quarrel With a Probably Fatal Termination.” Both she and Mr. Mulhern said that it was an accident. However, she subsequently died. He was charged with assault with intent to kill, which charge was changed to willful murder.

Frederick Ames died in September of 1893 and Rebecca Ames continued to live at 306 Dartmouth until her death in January of 1903.

The house was inherited by the five Ames children, and on April 4, 1903, the two married children – Oliver Ames and Helen (Ames) Hooper – transferred their interests in the property to their three unmarried siblings – Mary, Frederick Lothrop, Jr., and John – who continued to live in the house. They each also maintained homes in North Easton.

Frederick Lothrop Ames, Jr., married in May of 1904 to Edith Callender Cryder, described in an October 15, 1905, Boston Globe article as “one of the famous ‘Cryder triplets’ who were much talked of in society because of their beauty and accomplishments.”

Mary Ames continued to live at 306 Dartmouth during the 1910-1911 winter season. During the 1911-1912 season she lived at 199 Commonwealth and then traveled to Europe during the 1912-1913 season.  She resumed living at 306 Dartmouth during the 1913-1914 season but then spent the next season in Aiken, South Carolina. In October of 1915, she purchased 25 Commonwealth, which she remodeled and then may have moved to for part of the 1915-1916 winter season. She married in May of 1916 to former Massachusetts Lt. Governor Louis Adams Frothingham.  After their marriage, they lived in North Easton.

On May 31, 1918, John S. Ames and Mary (Ames) Frothingham transferred their interests in 306 Dartmouth to Frederick Lothrop Ames, Jr.

F. Lothrop Ames, Jr., was a trustee of his family estate and an investor in various manufacturing and utility businesses.  He also developed his home in North Easton as a farm where he bred Guernsey cattle and horses.

He died in June of 1921. Edith Ames continued to live at 306 Dartmouth during the 1922-1923 winter season, but then moved back to 413 Commonwealth, where they had lived when they were first married.

On June 7, 1923, 306 Dartmouth was purchased from the Ames family by Edwin Sibley Webster. He and his wife, Jane (Hovey) Webster, made it their Boston home. They previously had lived at 301 Berkeley.  They also maintained homes in Chestnut Hill and Holderness, New Hampshire.

Edwin Webster and his MIT classmate, Charles Stone, founded the firm of Stone & Webster in 1889.  Under their leadership, it became a major international construction, engineering, and consulting firm.

Edwin Webster died in May of 1950.  Jane Webster continued to live at 306 Dartmouth and in Chestnut Hill until her death in August of 1969.

On July 20, 1971, 306 Dartmouth was purchased from Edwin Webster’s estate by real estate developer Neil St. John (Ted) Raymond as trustee of the Reality Realty Trust.  Prior to purchasing the house, he applied for (and subsequently received) permission to convert the property into professional offices, including using the existing courtyard for parking.  On the same day, he acquired the empty lot at 161 Commonwealth, next door, which he used for additional parking for 306 Dartmouth.  And in October of 1980, he purchased 163 Commonwealth.

As part of his purchase of 306 Dartmouth, Neil St. John Raymond agreed to a deed covenant that “no structural alterations will be made to the building which will compromise the architectural harmony and integrity of the building” or cause any material change in “the exterior features of the building nor the present design of and materials in the halls, rooms, walls, staircases and other structural parts of the first floor, the first floor landing and the open skyview reaching from the first floor to the roof of the building,” The restriction remained in effect until August 31, 2000.

On April 1, 2010, Neil St. John Raymond sold the lot at 161 Commonwealth and 163 Commonwealth.  He retained 306 Commonwealth, which continued to be used for professional offices.

On March 14, 2013, 306 Dartmouth was purchased from Neil St. John Raymond by the FAL Boston LLC (formed by Fayed Al-Athel of Saudi Arabia).

In November of 2013, FAL Boston LLC applied for (and subsequently received) permission to remodel the property and convert it from offices into six units, including adding a rear addition to house a new elevator. The remodeling was designed by architect Kahlil Hamady.