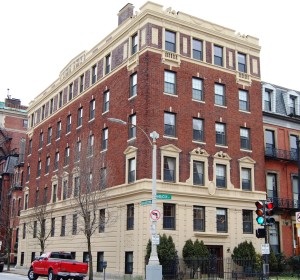 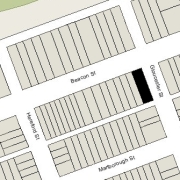 401 Beacon was designed by Eisenberg and Feer, architects, and built in 1927 as a five-unit apartment house, for William I. Schell, trustee of the Schell Realty Trust.  He is shown as the owner on the original building permit, dated April 21, 1927.

Click here for an index to the deeds for 401 Beacon.

William Schell had acquired the property on April 15, 1927. That same month, he applied for (and subsequently received) permission to raze the existing townhouse.

William Schell was a lawyer and assistant district attorney. He and his wife, Evelyn L. (Shapira) Schell, lived at The Kenmore at 496 Commonwealth.

On February 1, 1933, the Institution for Savings in Roxbury and its Vicinity foreclosed on its mortgage to William Schell and took possession of 401 Beacon.

On July 31, 1935, 401 Beacon was acquired from the Insitution for Savings in Roxbury by Louis J. Binda. On the same day, it was acquired from Louis Binda by Alfred W. Douglass and Carleton Hunneman, trustees of the Limechest Real Estate Trust.

On July 31, 1946, the Limechest Real Estate Trust transferred 401 Beacon back to Louis Binda, and on the same day, it was acquired from him by Frederick M. Roberts.

The property changed hands and on July 31, 1970, was acquired by Eliot Warden Denault, Sr., trustee of the Cameron Realty Trust. He and his wife, Marcia (Bartlett) Denault lived in one of the apartments. He was a real estate investor and former executive of an oil storage company.

On July 16, 1986, Eliot W. Denault, Jr., Dorothy B. Denault (his wife), and Thomas P. Fulchino, as trustees under the will of Eliot W. Denault, converted the property into eight condominium units, the 401 Beacon Street Condominium. The Cameron Realty Trust continued to own all of the units.

Eliot W. Denault, Jr., died in July of 2015 and on October 19, 2016, the Cameron Realty Trust transferred the property to his estate.  On the same day, Dorothy B. Denault and Jonathan Wagner, trustees, sold 401 Beacon to 401 Beacon LLC (Peter E. Georgantas, manager).

After acquiring the property, 401 Beacon LLC remodeled the building, and on May 16, 2019, it converted the property into six condominium units, the 401 Beacon Condominium.

In his Houses of Boston’s Back Bay, Bainbridge Bunting notes that, as originally built, 401-409 Beacon comprised “one of the most accomplished” integrated designs in the district, originally consisting of five houses, the three central houses (405-407-409 Beacon) forming a single unit and flanked by end pavilions at 401 Beacon (replaced in 1927) and 409 Beacon (modernized in 1947). 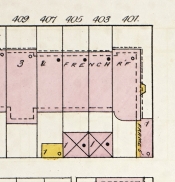 401 Beacon was built on a lot with a 35 foot 4 inch frontage on Beacon, but was set back ten feet from Gloucester, resulting in a 25 foot 4 inch façade on Beacon that balanced with the 26 foot frontage of 409 Beacon. At the rear of the lot, there was a one story brick ell that extended from the southern side of the main house to the alley.

The land on which 401-409 Beacon were built was purchased from the Boston Water Power Company on February 20, 1863, by banker and broker Robert Marion Pratt. He was unmarried and lived at 13 Louisburg Square with his parents, George Williams Pratt (one of the founders of the Boston Stock Exchange) and Mary Barrow (White) Pratt. The Pratts also maintained a home, Oakley, on Belmont Avenue in Watertown (it became the Oakley Country Club in 1898).

Click here for an index to the deeds for 401 Beacon (Demolished), and click here for further information about the land between the south side of Beacon and Alley 415, from Gloucester to Hereford.

On April 24, 1868, 401 Beacon was purchased from Robert Pratt by his unmarried aunt, Mary Pratt. She purchased 409 Beacon on the same day. She lived at 85 Mt. Vernon and at Oakley in Watertown, and purchased 401 and 409 Beacon as investments.

On November 4, 1874, 401 Beacon was purchased from Mary Pratt by Josephine (Maralious) Andrews, the wife of Charles H. Andrews. They previously had lived at 108 Charles Street. By the late 1870s, they also maintained a home in Lynn.

Charles Andrews was a partner in R. M. Pulsifer & Company, owners of the Boston Herald.  He sold his interests and retired in 1888.

Josephine Andrews died in October of 1887.

Charles S. Andrews and Katherine (Jackson) Andrews separated in 1890 and Charles Andrews moved back to 401 Beacon to live with his father and siblings.  He married again in January of 1893 to Annie G. Paul; after their marriage, they lived in an apartment at 31 Massachusetts Avenue.

Blanche Andrews married in November of 1892 to Harry S. Maffitt, a banker. After their marriage, they lived briefly at 401 Beacon with Charles Andrews, but then moved to live at 336 Dudley with his parents, James S. Maffitt, an actor, and Mary A. (Vetter) Maffitt. Blanche (Andrews) Maffitt died in October of 1893.

George Andrews married in January of 1894 to Bessie Allen Pitman. After their marriage, they lived in Winthrop.

Charles Andrews married again, in January of 1896, to Rosa (Wolf) Baer, the former wife of jeweler Nathan Baer. After their marriage, they lived at 401 Beacon with Edward and Elizabeth Andrews.

Charles Andrews died in June of 1897.  Rosa Andrews moved soon thereafter and married again, to George Edward Hale, a retired cigar store owner; by 1901, they lived at 350 Commonwealth with her son, Julius Baer.  Edward and Elizabeth Andrews also moved; by 1900, they had separated and he was living in New York City.

On May 31, 1898, 401 Beacon was purchased from the Andrews family by Miss Frances Vose Emerson.

Miss Emerson operated a private “school for young ladies” at 401 Beacon and also made it her home.  Miss Elizabeth F. Thayer lived with her and was a teacher in the school (she is identified as Miss Emerson’s partner in the 1900 US Census).  Miss Emerson and Miss Thayer previously had lived and operated a school at 18 Newbury.

Miss Thayer moved to Arlington in about 1903 but continued to teach at the school.  Miss Emerson continued live at 401 and to operate the school there.

In the fall of 1904, Miss Mary Elizabeth Church joined Miss Emerson at 401 Beacon and they became joint principals of the school. Miss Miriam A. Bytel also moved to 401 Beacon and became assistant principal.  The school was operated as a “home and day school” for girls, offering general and college preparatory courses.

By the 1905-1906 winter season, Frances Emerson had retired and moved to The Abbotsford at 186 Commonwealth and Mary Church was operating the school as sole principal. Miriam Bytel continued to live at 401 Beacon and teach at the school until about 1909; she had moved to Cambridge by 1910. Elizabeth Thayer continued to teach at Miss Church’s school until her death in August of 1907.

In January of 1910, Miss Church acquired 6 Gloucester, which she operated as an annex to her school.   A 1915 directory of private schools noted that “Miss Church is an Episcopalian and all resident pupils are expected to attend Trinity Church.”

During the 1917-1918 winter season, 401 Beacon was the home of Mrs. Althea Emogene (Hyde) Andrew, the wife of John Andrew.  She was principal of the Beacon School, a co-educational boarding and day school located at 1440 Beacon in Brookline.  She may have been living at 401 Beacon while her husband was traveling or, possibly, serving in the military.  By the 1918-1919 season, she had moved to the school in Brookline, where they continued to live in 1920.

By the 1919-1920 winter season, 401 Beacon was the home of Ernest Edmund Nutman, a cabinetmaker, and his wife, Phebe Elizabeth (Foster) Nutman. They previously had lived in Cambridge. They continued to live at 401 Beacon during the 1925-1926 winter season, but moved thereafter back to Cambridge.

The house was razed later that month.