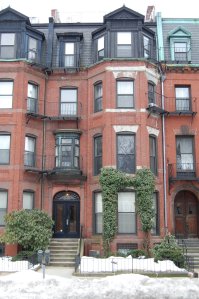 On December 10, 1883, 346 Commonwealth was purchased from Samuel H. Whitwell by Lewis Brooks Bailey, one-half in his own name and one-half in his capacity as trustee for his sister, Elizabeth, under the will of their mother, Mary (Hall) Bailey, widow of Lewis Bailey. He and his sister made it their home. They previously had lived at 55 Bowdoin with their mother, who had died in October of 1882, and their sister, Mary, who had died in August of 1883.

Lewis Bailey married in April of 1884 to Anna Lawrence Hamilton. After their marriage, they lived at 326 Commonwealth with his sister. They were joined by Anna Bailey’s sister, Virginia (Hamilton) Forster (called Foster in the Blue Books), the widow of Theodore Forster, who had died in January of 1883 in St. Louis.

He died in November of 1888.  Anna (Hamilton) Bailey, Virginia (Hamilton) Forster, and Elizabeth Bailey continued to live at 326 Commonwealth during the 1888-1889 season, but moved thereafter. By the early 1890s, Elizabeth Bailey was living at the Hotel Bellevue at 19-23 Beacon, and Anna Bailey and Virginia Forster were living in St. Louis, where they had been born.

On February 26, 1889, 326 Commonwealth was purchased from Lewis Bailey’s estate and heirs by Frances (Fannie) Ann (Holden) Tinkham, the wife of wholesale produce merchant George Henry Tinkham. They previously had lived at 74 Montgomery. They also maintained a house in Lynn. His sister, Abbie A. Tinkham, lived with them.

Rebecca Tinkham married in January of 1902 to Stuart Warren Cramer, an engineer from Charlotte, North Carolina, where they lived after their marriage.

Madeleine Tinkham married in April of 1910 to Loris Almy Miller, a bond broker from Chicago, where they lived after their marriage. By 1920, they had returned to Winchester and by the 1921-1922 winter season were living at 369 Marlborough. They also continued to maintain a home in Chicago.

Abbie Tinkham died in March of 1913, and Fannie Tinkham died in December of 1923. 326 Commonwealth was inherited by George Holden Tinkham, Rebecca (Tinkham) Cramer, and Madeleine (Tinkham) Miller, and in April of 1926, George Tinkham acquired his sisters’ interests.

George Holden Tinkham continued to live at 326 Commonwealth and Washington DC until about 1940, when he moved to 369 Marlborough to live with Madeleine (Tinkham) Miller.

On December 9, 1939, 326 Commonwealth was purchased from Settalkel Maloof by Harvey Willard Forbes, a milk dealer, and his wife, Margaret A. (McGowan) Forbes. They lived in Melrose. In January of 1940, he applied for (and subsequently received) permission to convert the property from a single-family dwelling into five apartments and a doctor’s office.

The property changed hands and on December 29, 1941, was acquired by Louis Rockwell Chadbourne, a wholesale fuel oil salesman. He and his wife, Ethel Victoria (Smith) Chadbourne, lived in Medford.

On March 13, 1959, 326 Commonwealth was purchased from Louis Chadbourne by Yale Goldman and his wife, Norma (Basil) Goldman. They lived in Newton. He was district manager for the Penn Mutual Life Insurance Company. The Goldmans also owned 324 Commonwealth.

326 Commonwealth remained an apartment building in 2018. 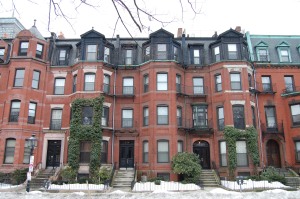