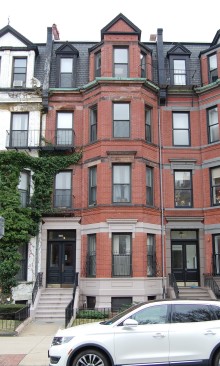 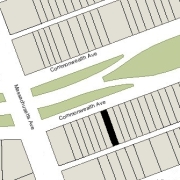 350 Commonwealth was designed by Obed F. Smith, architect, and built in 1883-1884 by Vinal & Dodge, masons, for building contractor George Wheatland, Jr. for speculative sale. He is shown as the owner on the original building permit application, dated November 10, 1883. The house was originally numbered 348 Commonwealth until about 1889, when 328 Commonwealth was built and the houses to the west of it were renumbered.

On November 13, 1884, 350 Commonwealth was purchased from George Wheatland, Jr., by retired shipping merchant Arthur B. Gove. He and his wife, Margaret (Flood) Gove, made it their home. They previously had lived in Brookline.

Margaret Gove died in March of 1888 and he moved soon thereafter to the Parker House hotel.

Louis Wolf was an importer and dealer in fancy goods, dolls, and toys.

Barbara Wolf died in March of 1893 and Louis Wolf continued to live at 350 Commonwealth.

Nathan and Rosa (Wolf) Baer divorced and by 1894, Rosa Baer and their son, Julius Irving Baer, had moved to 350 Commonwealth to live with Louis Wolf. Julius Baer was a clerk and later a partner in Louis Wolf’s importing business.

Rosa Baer married again in January of 1896 to Charles H. Andrews, a retired editor of the Boston Herald. After their marriage, they lived at 401 Beacon. Julius Baer continued to live at 350 Commonwealth with his uncle.

Charles Andrews died in June of 1897 and Rosa (Wolf) Baer Andrews married again to George Edward Hale, a retired cigar store owner. By June of 1900, at the time of the 1900 US Census, they were living at the Hotel Westminster (southeast corner of St. James and Trinity Place). 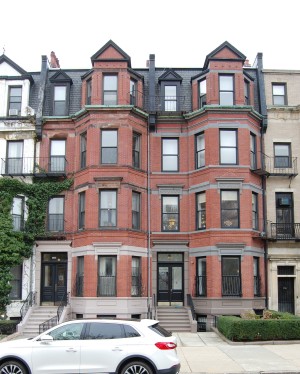 At the same time as he acquired 350 Commonwealth, Julius Baer created a trust, with himself as trustee, under which his mother had the right to live at 350 Commonwealth for the rest of her life, or to lease or sell the property, in exchange for her paying the interest on any mortgages and all property taxes.

George Hale died in March of 1911. Julius Baer and Rosa Hale continued to live at 350 Commonwealth until her death in June of 1915.

By 1916, Julius Baer was living at 76 Huntington. He continued to own 350 Commonwealth and also maintained a residence in New York City.  By 1917, he had married Irene Lee, and they were living at 350 Commonwealth when they applied for passports in May of 1917 to travel to Canada and Japan.

Julius and Irene Baer subsequently moved to Denver because of his health.  They divorced there in December of 1923, he married again in May of 1924 to his nurse, Elsie Bader, and he died in October of 1924.

On July 21, 1920, 350 Commonwealth was acquired from Annie Varney by Mary Elizabeth (called Elizabeth) (Mitchell) Kellogg, the wife of Dr. Frederic Leroy Kellogg. He was a physician and also maintained his medical offices there. They had married in 1918 and then had lived at 366 Commonwealth, where he also had maintained his office.

The Kelloggs converted 350 Commonwealth into offices and apartments.

Frederic Kellogg died in May of 1939.  After his death, Elizabeth Kellogg applied for a license to operate a lodging house for aged persons at 350 Commonwealth.  In June of 1939, the Building Department advised her of the egress and change in occupancy requirements that had to be met before she could use the property for that purpose.  She subsequently abandoned the application, but applied once again in 1945, and was once again informed of the requirements that needed to be met.

On February 17, 1948, 350 Commonwealth was acquired from Edward Swartz by Russell Dwelley Curry, who lived in one of the apartments. He previously had lived in Arlington.

Russell Curry was owner and operator of the Curry School of Dance in Arlington, which taught dancing and etiquette.  The school was founded by his mother, Grace (Dwelley) Curry, wife of Frederick Curry.

In August of 1948, Russell Curry applied for permission to remodel the interior, indicating that the use was to be the “same as previous: offices and apartments.”  He subsequently abandoned the permit, but based on City Directory entries, appears to have occupied the property as medical offices and apartments.