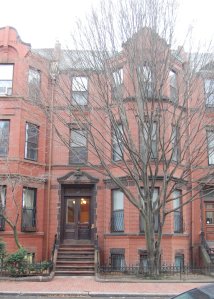 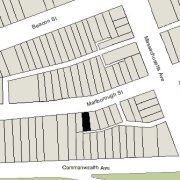 George Wheatland, Jr., purchased the land for 430-440 Marlborough and 381-391 Commonwealth on June 20, 1885, from Henry M. Whitney. It was part of a parcel Henry Whitney had acquired in two transactions, on November 24, 1882, and on March 20, 1885, all part of a tract of land originally purchased from the Boston Water Power Company on June 1, 1880, by a real estate investment trust formed by Francis W. Palfrey, Francis A. Osborn, and Grenville T. W. Braman.

Click here for an index to the deeds for 438 Marlborough, and click here for further information on the land west of Massachusetts Avenue between the south side of Beacon and the north side of Commonwealth. 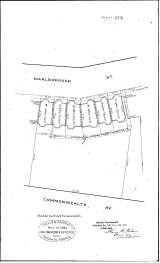 On January 4, 1887, 438 Marlborough and 440 Marlborough were purchased from George Wheatland, Jr., by wholesale lumber merchant Edward Jonathan Hammond. He and his wife, Alice Ida (Eastman) Hammond, made 440 Marlborough their home.

On January 4, 1888, 438 Marlborough was acquired from Edward Hammond by Sarah A. (Garland) Kennard, the widow of Daniel Kennard. She previously had lived in the Wollaston district of Quincy where she and her husband had owned a farm. He had died there in January of 1884.

Sarah Kennard died in April of 1890. In her will, she left her daughters, Minnie G, Kennard and Edith M. Kennard, and her sons, Harrison G. Kennard, Charles E. Kennard, and Frank E. Kennard, two dollars each. She named her eldest daughter, Eugenie (Jennie) Kennard, her executor and left her entire estate to her.

438 Marlborough became the home of Eugenie, Minnie, and Edith Kennard.

Eugenie Kennard married in November of 1892 to General Thomas R. Mathews, a widower. On November 16, 1892, prior to her marriage, she transferred her interest in 438 Marlborough to Edith Kennard. After their marriage, Thomas and Eugenie Mathews lived briefly at 8 Wayne in Roxbury and then made 438 Marlborough their home.

Minnie Kennard continued to live at 438 Marlborough until the mid-1890s, when she moved to Quincy to live on the family farm with her brothers, Harrison and Frank Kennard.

The Mathewses and Edith Kennard continued to lived at 438 Marlborough and in Quincy.

During the 1902-1903 winter season, they were living elsewhere and 438 Marlborough was the home of Welthea Loring (Malbon) Bremer, the widow of William Mathias Bremer, and their adult children, Maud Clifton Bremer and Clifton Long Bremer, a lawyer. They had lived at The Charlesgate at 535 Beacon the previous season. By the 1903-1904 season, they had moved to the Hotel Tuileries at 270 Commonwealth.

The Mathewses resumed living at 438 Marlborough during the 1903-1904 season, but were again living elsewhere during the 1904-1905 season, and 438 Marlborough was the home of Dr. Edward Stickney Wood and his wife, Elizabeth A. (Richardson) Wood. They previously had lived at The Holland at 50 Commonwealth. They also maintained a home in Pocasset. Dr. Wood was a professor of medical chemistry at Harvard Medical School. A specialist in analyzing human blood, he was an expert witness in numerous murder cases. The Woods moved from 438 Marlborough after the 1904-1905 season, and he died in July of 1905.

Edith Kennard resumed living at 438 Marlborough during the 1905-1906 winter season, but thereafter she and the Mathewses made their year-round home in Quincy.

During the 1906-1907 winter season, 438 Marlborough was the home of William Adams Copeland and his wife, Ida May (Haynes) Copeland. They previously had lived in Melrose. He was a manufacturer of shoe tree machinery. They had moved by the 1907-1908 season and by 1909 were living in Newton.

By the 1909-1910 winter season, 438 Marlborough was the home of Arthur S. Austin, a banker and note broker, and his unmarried sisters, Harriet Almira Austin and Caroline W. Austin. They previously had lived in Brookline. They also maintained a home in Swampscott.

On March 27, 1913, 438 Marlborough was purchased from Edith Kennard by Maria Antoinette (Hunt) Evans, the widow of Robert Dawson Evans. She lived at 17 Gloucester.

Arthur, Harriet, and Caroline Austin continued to live at 438 Marlborough.

Maria Evans died in October of 1917. In her will, she left 438 Marlborough to Arthur Austin.

He died died in January of 1924 and Caroline Austin died in November of 1929. Harriet Austin continued to live at 438 Marlborough, where she celebrated her 100th birthday on September 25, 1931. She moved soon thereafter and died in Hopedale in 1935.

On August 22, 1932, 438 Marlborough was purchased from Harriet Austin by Mrs. Sarah Elizabeth (Williams) Hodson, the former wife of Septimus Hodson. She was a secretary in the real estate offices of J. Sumner Draper.

On April 5, 1933, 438 Marlborough was acquired from S. Elizabeth Hodson by Dr. Whitman King Coffin, a physician, and his wife, Rosaline (Moncrieff) Coffin. He also maintained his medical office there. They previously had lived in Medford and he had maintained his office at 416 Marlborough. By the 1940s, they also maintained a home on Swan Island in Maine.

The Coffins continued to live (and he to maintain his office) at 438 Marlborough until about 1962.

On August 15, 1962, 438 Marlborough was purchased from the Coffins by real estate dealer Francis Ralph Sundbergh and his wife, Julia (Abraham) Sundbergh.

In November of 1968, Alexander Kocsy was cited by the Building Department for failing to maintain the building and also for allowing it to be occupied as a four-family dwelling when its legal occupancy was a single-family dwelling.

On March 8, 1977, the East Cambridge Savings Bank foreclosed on a mortgage given by Alexander Kocsy and sold 438 Marlborough to Alan Victor DiPietro. In May of 1977, he filed for permission to convert the property from a single-family dwelling into four apartments. The permit was abandoned. He filed again in September of 1977 and, once again, the permit was abandoned.

Alan DiPietro died in April of 1995 and 438 Marlborough became the property of his mother, Celia L. (Bagnulo) DiPietro, the wife of Carmine DiPietro. They lived in Revere. On November 18, 1997, she transferred the property to herself and her husband as trustees of the 438 Marlborough Street Realty Trust.

On January 26, 2012, 438 Marlborough was acquired from Sally (DiPietro) Pacheco, daughter of Carmine and Celia DiPietro and successor trustee, by the 438 Marlborough Street LLC (John Tavano, manager).

438 Marlborough was assessed as four-to-six family dwelling in 2018.