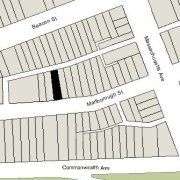 The land was part of a parcel Henry Whitney had acquired in two transactions, on November 24, 1882, and on March 20, 1885, all part of a tract of land originally purchased from the Boston Water Power Company on June 1, 1880, by a real estate investment trust formed by Francis W. Palfrey, Francis A. Osborn, and Grenville T. W. Braman.

Click here for an index to the deeds for 445 Marlborough, and click here for further information on the land west of Massachusetts Avenue between the south side of Beacon and the north side of Commonwealth.

In July of 1885, when the eight houses were under construction, real estate dealer Alexander H. Porter offered them for sale. His advertisement in the Boston Evening Transcript noted that “they have parlor, dining-room and kitchen on the first floor and are to be finished in hard wood. The prices will vary from $20,000 to $25,000. If purchased now they will be finished to suit, and minor changes in the plans can be made without extra cost.”

On February 24, 1887, 445 Marlborough was purchased from N. Henry Chadwick and Oscar L. Stillings by Georgiana Alice (Hathaway) Watson, the wife of banker Charles Herbert Watson. They had married in December of 1886.

They continued to live at 445 Marlborough during the 1893-1894 winter season, but moved thereafter to Brookline.

On April 30, 1894,445 Marlborough was purchased from G. Alice Watson by Henry Austin Clapp. He and his wife, Florence (Clarke) Clapp, made it their home. They previously had lived at the Hotel Eliot in Roxbury.

Henry Clapp died in February of 1904. In his will, he left 445 Marlborough to his wife.

Florence Clapp and their son, Roger Clapp, a lawyer, continued to live at 445 Marlborough during the 1904-1905 winter season, but moved thereafter to 249 Berkeley. She continued to own the house and lease it to others.

By the 1905-1906 winter season, 445 Marlborough was the home of George Noyes Whipple and his mother, Elizabeth Ann (Noyes) Whipple, widow of George Whipple. They previously had lived at 129 Marlborough. They also maintained a home in Manchester, Massachusetts.

George Whipple was an advertising agent, having been owner of a public storage warehouse until about 1905.

George Whipple and his mother continued to live at 445 Marlborough during the 1908-1909 season, but moved thereafter to 459 Beacon to live with Elizabeth Whipple’s brother, George Edward Noyes.

In 1911 and 1912, 445 Marlborough was the home of David McDougal LeBreton, a lieutenant serving at the US Naval Station. He was joined by his mother, Margaret (Nopie) Stockton (McDougal) LeBreton, wife of Albert Joseph LeBreton, and his sister, Marguerite LeBreton. They all previously had lived in Washington, DC. Albert LeBreton, who was an attorney in San Francisco and then in Washington DC, probably also joined them. A July 14, 1910, note in the San Francisco Examiner commented that “Albert J. LeBreton will soon join his wife and daughter, Margaret [sic] LeBreton, in Boston. The family plans to reside in Massachusetts during the period Ensign [sic] Le Breton, U. S. N., is stationed on that coast.”

Albert LeBreton was an attorney in San Francisco before moving to Washington DC in the 1890s. He died in March of 1914 while traveling in Italy. A native Californian, his March 26, 1914, obituary in the Statesman (Salem, Oregon) described him as “the third white child” born in San Francisco.

Margaret (McDougal) LeBreton was the daughter of Rear Admiral David McDougal, the brother of John McDougal, the second Governor of California.

David McDougal LeBreton was a career naval officer and would rise to the rank of Rear Admiral in World War II.

On April 29, 1918, the Winchester Savings Bank foreclosed on a mortgage given by Florence Clapp and took possession of 445 Marlborough.

On May 11, 1918, the property was acquired from the bank by Teckla Metta (Hilbert) Emerson, the wife of Dr. Frederick Lincoln Emerson. They previously had lived in an apartment at 416 Marlborough, where he also had maintained his medical office. 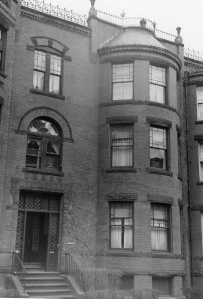 Frederick Emerson was a homeopathic physician and obstetrician; he maintained his office at 445 Marlborough.

Frederick Emerson died in November of 1940. Teckla Emerson continued to live at 445 Marlborough until her death in June of 1944.

On February 1, 2019, 445 Marlborough was purchased from Teckla Emerson’s estate by Alfred W. Hommel, a machinist, and his wife, Frances (Rossi) Hommel, who operated it as a lodging house. They previously had lived in Winthrop. They continued to live at 445 Marlborough until about 1947.

On February 14, 1947, 445 Marlborough was purchased from the Hommels by Anthony Herman Weyand, an electrician. He was a widower. Living with him were his sister-in-law, May (Walker) Weyand, the estranged wife of Anthony Weyand’s brother, Fred John Weyand, and May Weyand’s daughter by her first marriage, Mrs. Mae (Perley) McGovern, a cashier. They all previously had lived at 484 Brookline.

Anthony Weyand and Mae McGovern continued to live at 445 Marlborough until his death in February of 1958. After his death, Mae McGovern moved to an apartment at 366 Commonwealth.

On July 7, 1958, 445 Marlborough was purchased from Andrew Weyand’s estate by real estate dealers Stuart H. Hastings and Joseph A. Gautreau. That same month, Harry Goode, presumably on behalf of Stuart Hastings and Joseph Gautreau, applied for (and subsequently received) permission to convert the property into six apartments.

On December 31, 1958, 445 Marlborough was acquired from Stuart Hastings and Joseph Gautreau by Donald A. Foley and his wife, Marion M. Foley. They lived in Saxonville, Massachusetts.

On February 27, 1960, 445 Marlborough was purchased from the Foleys by James D. Kelleher and his wife, Bridget P. (Keeffe/O’Keefe) Kelleher. They lived in Belmont. In November of 1960, they filed for (and subsequently received) permission to convert the property into seven apartments, noting on their application that they “purchased this property as a seven family dwelling” and had been “informed that the building had been used for that purpose for many years.”

On May 29, 1962, 445 Marlborough was purchased from the Kellehers by Seth A. Armen, an associate professor at Northeastern University’s College of Business Administration, and his wife, Eloise (Bullard) Armen. They lived in Norfolk, Massachusetts.

On July 28, 1972, 445 Marlborough was acquired from Kenneth L. Shaw, by then a resident of Oxford, Maryland, by Alfred J. Greenwood and William F. Vinal. In January of 1972, they purchased 425-427 Marlborough from him. On April 2, 1976, Alfred Greenwood acquired William Vinal’s interest in all three properties.

The property changed hands and on February 28, 2006, was purchased by Kenneth S. Frieze, a business consultant and investment banker. In May of 2006, he applied for (and subsequently received) permission to remodel the property and convert it into a two family dwelling. After the remodeling was completed, he and his wife, wedding and special event planner Tamar Salter Frieze, made it their home.

On September 8, 2021, 445 Marlborough and Units 4 and 5 at 447 Marlborough were purchased from the Friezes by John Capodilupo and his wife, Emily Capodilupo.

445 Marlborough continued to be assessed as a two-family dwelling in 2021.