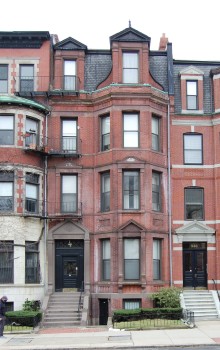 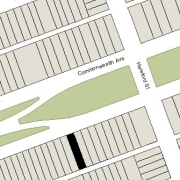 336 Commonwealth was designed by architect George A. Avery and built in 1881 by Vinal & Dodge, masons, for speculative sale. Vinal & Dodge are shown as the owners on the original building permit application, dated February 9, 1881. The house was originally numbered 334 Commonwealth until about 1889, when 328 Commonwealth was built and the houses to the west of it were renumbered.

On June 6, 1882, 336 Commonwealth was purchased from Warren Vinal and Charles Dodge by Caroline (Osborn) Warren, the wife of Frederick Warren. At the time of their purchase, they were living in New York City, but had made 336 Commonwealth their home by the 1883-1884 winter season. They also maintained a home in Edgartown.

Frederick Warren was associated with his family’s shipping firm, Warren & Company, operators of steamships between Liverpool and Boston.

On May 8, 1896, Caroline Warren transferred the property into her husband’s name.

Frederick Warren died in May of 1900. 336 Commonwealth continued to be owned by a trust established under his will for the benefit of his widow.

Caroline Warren continued to live at 336 Commonwealth until her death in July of 1910. In 1910, her nephew, Frederick Osborn, lived with her. He was a civil engineer. 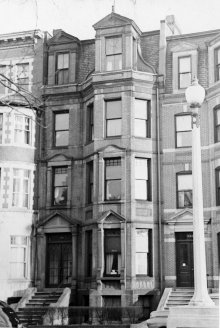 On March 25, 1914, J. Sumner Draper transferred the property back to Lillior Nutting.

On October 6, 1914, 336 Commonwealth was purchased from Lillior Nutting by Charlotte Elizabeth (Houston) Fairchild, the wife of John Cummings Fairchild. They previously had lived in Dedham.

John Fairchild was a stockbroker.  Charlotte Fairchild was a professional photographer with studios at 384 Boylston.  They separated in 1915.  He moved to 46 Gloucester, and she moved to New York City, where she became well-known for her photographs of actors, dancers, and members of New York Society.

On February 8, 1918, J. Sumner Draper’s first cousin, Joseph Porter Draper, foreclosed on a mortgage he held on 336 Commonwealth and took possession of the property.

On April 14, 1920, 336 Commonwealth was purchased from Joseph Draper by Clara Agatha (McNamee) Bradshaw, the wife of stockbroker James Edwin Bradshaw. They previously had lived in Winchester.

On June 29, 1923, 336 Commonwealth was purchased from the Bradshaws by Dr. William H. Regan. He was a physician and eye, ear, and throat specialist, and converted the property into a combination of medical offices and lodgings. He and several other physicians maintained his offices there. A bachelor, he lived in Cambridge and also maintained lodgings at 336 Commonwealth.

In April of 1928, John E. Regan (William Regan’s brother) et al applied for (and subsequently received) permission to install a fire escape.  The intended occupancy of the property was shown as being a lodging house.

The property was not listed in the 1931 List of Residents and was shown as vacant in the 1931 and 1932 City Directories.

On June 30, 1937, the Massachusetts Hospital Life Insurance Company foreclosed on a mortgage it held on 336 Commonwealth and sold the property to real estate dealer Henry C. Brookings. On March 1, 1938, it was acquired from him by George and Rose LeTendre.

On March 29, 1946, 336 Commonwealth was acquired from the LeTendres by Leonard Francis Martin, an electrician, and his wife, Juliette Sadie (Boutiette) Martin, who operated it as a lodging house. They previously had lived in Somerville. They continued to live at 336 Commonwealth until about 1950.

On December 20, 1950, 336 Commonwealth was acquired from the Martins by Albert Zimmerman. He also owned 344 Commonwealth. On March 30, 1951, he transferred both properties to the Zimmerman Realty Corporation.

In June of 1951, he applied for (and subsequently received) permission to convert 336 Commonwealth from a lodging house into ten apartments.

336 Commonwealth remained an apartment house in 2020. 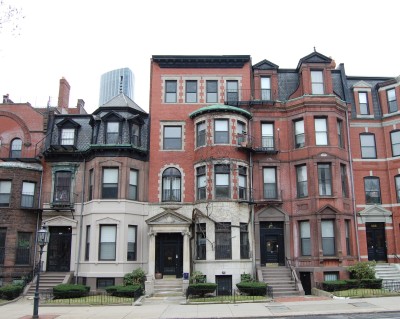